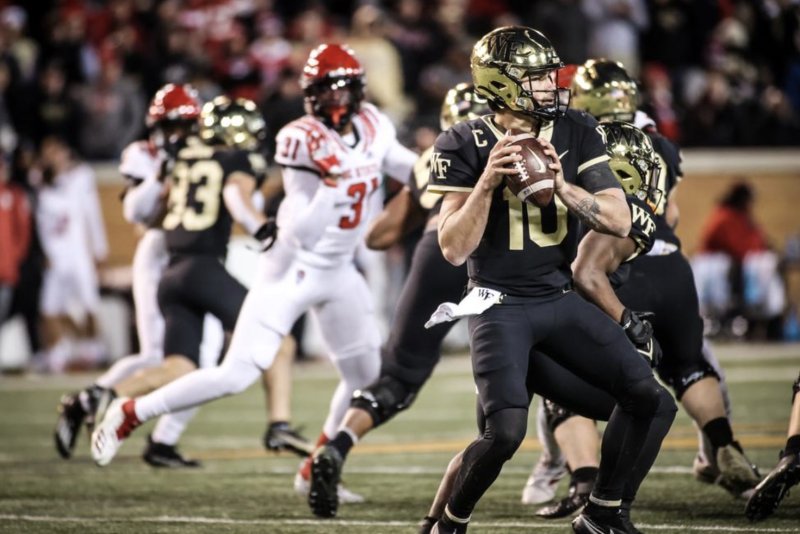 Aug. 10 (UPI) -- Wake Forest quarterback Sam Hartman has a "non-football related medical condition" and will be out indefinitely, the athletic department said Wednesday.

The decision to keep him off the field came after medical evaluation Tuesday at the Atrium Health Wake Forest Baptist Medical Center in Winston Salem, N.C.

"Tuesday was a frustrating day, but I am extremely grateful for our medical staff and for Dr. Chris Miles and Niles Fleet for staying with me throughout this process," Hartman said in a news release.

"I look forward to attacking this rehabilitation process and I am so appreciative of the support I have received from my family, teammates and coaches."

Wake Forest said Hartman sought medical attention Tuesday after a workout, and that results from medical tests and "subsequent treatment" will remove the quarterback from team activities "indefinitely."

"Sam is the true embodiment of a leader and is one of the finest young men I have ever had the pleasure to coach," Wake Forest coach Dave Clawson said.

"As a two-time captain and coming off record-setting seasons in 2020 and 2021, Sam was intensely focused on the betterment of his teammates throughout the entire offseason and helping our program continue to achieve great things on the field.

"He is an incredible person in the community and in the classroom. We'll look forward to having Sam back on the field as soon as he can, and in the meantime, Sam and his family have the full support of our coaching staff and program in his recovery."

His 39 touchdown passes were second-most among ACC quarterbacks, trailing only Pittsburgh's Kenny Pickett. He also led the conference in pass attempts.

The four-year starter totaled 9,266 yards, 72 touchdown passes and 29 interceptions through his first 36 games for the Demon Deacons. Michael Kern and Mitch Griffis are the other quarterbacks on the team's depth chart.

The Demon Deacons will host VMI in their first game of the season at 7:30 p.m. EDT Sept. 1 at Truist Field in Winston-Salem.

MLB // 14 hours ago
MLB mulls potential time changes for Mets-Braves series due to hurricane
Sept. 28 (UPI) -- MLB representatives are holding talks with the Atlanta Braves and New York Mets about potential changes to their scheduled series this weekend in Atlanta because of Hurricane Ian' path, the league confirmed Wednesday.

MLB // 15 hours ago
Marlins pitcher becomes first in 100-plus years to balk three times in same at-bat
Sept. 28 (UPI) -- Veteran pitcher Richard Bleier made history -- in an unfortunate manner -- in a Miami Marlins win over the New York Mets, becoming the only MLB player in more than 100 years to be called for three balks during one at-bat

Sports News // 1 day ago
Hurricane causes shuffling of college, professional sports schedules
Sept. 27 (UPI) -- Several college football games were relocated and/or scheduled, while others remain in limbo due to Hurricane Ian's impact throughout Florida. The storm also has made an impact on this week's NFL and NHL schedules.