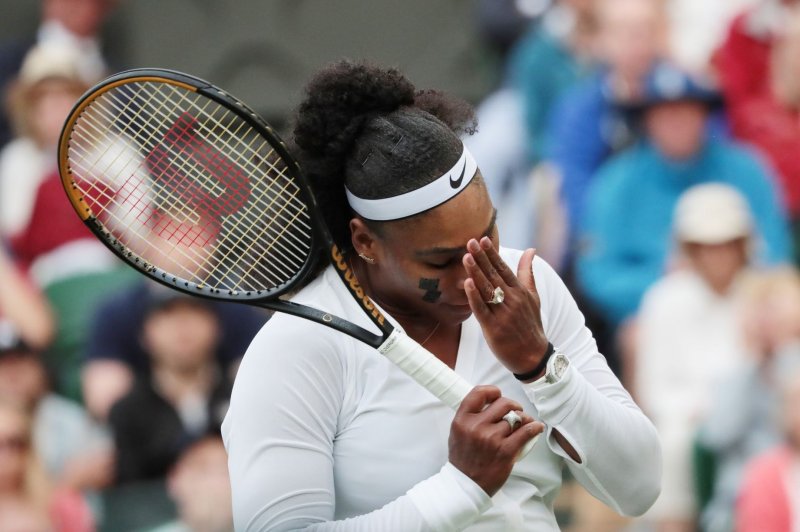 American Serena Williams reacts to a play during her Wimbledon match against France's Harmony Tan on Tuesday at the All England Lawn Tennis and Croquet Club in London. Photo by Hugo Philpott/UPI | License Photo

June 29 (UPI) -- Tennis legend Serena Williams, appearing at Wimbledon as a wild card entry, was upset on Tuesday in her first Grand Slam match in more than a year -- and said afterward that she couldn't give an answer when asked if she's eyeing retirement after 27 years on the women's tour.

"It was really tough," Williams told reporters after the match. "I had some chances to win the first set, but it didn't work out. It was totally different for me."

Williams also exited in the first round at Wimbledon a year ago, but had been struggling with an injury. She returned to the court on June 21 for doubles play at Rothesay International Eastbourne, a Wimbledon warm up, but withdrew from that tournament due to an injury to partner Ons Jabeur.

Williams, 40, said that her performance this year was "all she could do" and that she "can't change time." She was vague in several responses to questions about retirement.

Williams said she would not be "satisfied" with memories from Tuesday's match if it was her last at Wimbledon. She also said she wasn't "summing up" her career at the All England Lawn Tennis and Croquet Club.

"I'm so emotional," Tan said in her on-court interview. "She is a superstar. When I was young, I watched her so many times on TV. For my first time at Wimbledon, it's just, wow."

As a wild card, Williams was unseeded at Wimbledon this year -- the first time she wasn't a ranked player in the tournament since her first appearance there in 1998. She missed the tournaments in 2006 and 2017 due to injury and pregnancy, respectively, and has won the ladies' draw at Wimbledon seven times, most recently in 2016.

Before Wimbledon began on Monday, Williams was ranked No. 411 in the world.

Williams was among eight American women to exit the singles tournament Tuesday. No. 1 Iga Swiatek of Poland, No. 4 Paula Badosa of Spain, No. 5 Maria Sakkari of Greece, No. 11 Cori "Coco" Gauff of the United States and fellow American Amanda Anisimova (No. 20) were among the top players to win first-round matches Tuesday at Wimbledon.

No. 6 Karolina Pliskova of the Czech Republic and No. 9 Garbine Muguruza of Spain also took the court, but their matches were suspended due to rain.

On the men's side, No. 2 Rafael Nadal of Spain, No. 4 Stefanos Tsitsipas of Greece, No. 11 Taylor Fritz of the United States, No. 12 Diego Schwartzman of Argentina and No. 13 Denis Shapovalov of Canada were the top players to win first-round matches Tuesday at Wimbledon.

No. 1 Novak Djokovic of Serbia, No. 3 Casper Ruud of Norway, No. 5 Carlos Alcaraz of Spain, No. 9 Cameron Norrie of England and No. 10 Jannik Sinner of Italy will be among the top men's players on the court Wednesday for second-round matches. Americans Reilly Opelka (No. 15), John Isner (No. 20), No. 23 Frances Tiafoe, No. 30 Tommy Paul, Steve Johnson and Chris Harrison also will be in action.

No. 2 Anett Kontaveit of Estonia, No. 3 Ons Jabeur of Tunisia, Sakkari, Muguruza, Pliskova, No. 8 Jessica Pegula of the United States and No. 10 Emma Raducanu of England will be the top women's players with matches Wednesday in London.

Wednesday's Wimbledon coverage schedule is from 6 a.m. through 4:30 p.m. on ESPN. ESPN will air Thursday's and Friday's matches at the same time. Weekend coverage will air from 8 a.m. to 1 p.m. on ESPN and from 1 to 4 p.m. on ABC on Saturday and Sunday.

MLB // 12 hours ago
Athletics' Stephen Vogt homers in final career at-bat
Oct. 6 (UPI) -- Oakland Athletics veteran Stephen Vogt, who announced he will retire from baseball, ended his career in style, getting introduced by his children for his first at-bat before homering in his final plate appearance.

MLB // 1 day ago
Man who caught Judge's home run ball, worth up to $2M, unsure about what to do
Oct. 5 (UPI) -- Corey Youmans, who caught Aaron Judge's record-breaking 62nd home run at the latest New York Yankees game in Arlington, Texas, told reporters he hasn't decided what to do with the valuable keepsake.