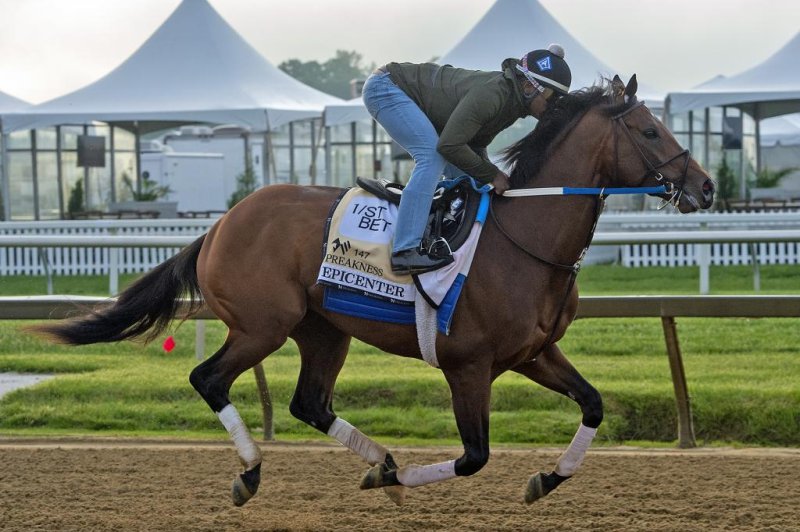 May 20 (UPI) -- The Preakness Stakes, second jewel of the U.S. Triple Crown, always has a lot of variables -- fresh horses against Kentucky Derby warriors, the unusual 1 3/16-mile distance and the prospect of yet another testing race three weeks down the road in the 1 1/2-mile Belmont Stakes.

The forecasters, as usual, don't agree entirely about exactly how hot it will be Saturday in Baltimore. But the range is from hot to very hot -- as high as 97 degrees by some reckoning, and with plenty of sun.

"I'm as concerned as you can be, if you've never dealt with it or performed under it being that warm," Steve Asmussen, trainer of Preakness favorite and Kentucky Derby runner-up Epicenter said Thursday.

"I think the variable we're not sure of is if it is actually 95, 96 degrees here, and we know it can get pretty sticky here in Baltimore. All of them are going to have to deal with that, but he's a big horse turning back in 14 days. Make sure he's drinking plenty of water and he's hydrated, just like your kids."

Other than that concern, Asmussen said the Louisiana Derby winner has settled in well at Pimlico and seems to handle the track well.

He and jockey Joel Rosario said they're disappointed they won't have a rematch with Rich Strike, who ran by Epicenter in the final sixteenth in Louisville to win the Kentucky Derby. Rich Strike isn't contesting the Preakness.

And Rosario said he isn't locked into any strategy for Saturday's race.

"It's the sort of thing where we'll see what the speed has to say," Rosario said. "And we'll play off of that. I'm going to ride him with a lot of confidence, and if we're the best, we'll win."

Speed actually could be a threat. Early Voting, a Gun Runner colt trained by Steve Asmussen, is making just his fourth start and has been pointing to this race since he finished second, beaten just a neck, in the Grade II Wood Memorial on April 9.

He's a speedball, and assistant trainer Baldo Hernandez found out after a Thursday gallop that he's feisty and ready to run.

"It was a normal gallop, a mile and a quarter," Hernandez said. "It was nice, smooth like we always do. He handled the track really well. He likes it. ... Coming home here, he reared up. I think that's pretty good. He's always like that. He's the same."

Secret Oath seeks to give trainer D. Wayne Lukas his seventh victory in the second jewel of the Triple Crown, and Lukas said he's happy with the filly's condition.

"I feel pretty good about her," Lukas said. "I actually think that she is training better these two weeks than she did the two weeks before the Oaks. Even with the trip here, it seems like she is taking a hold of it. That might be maturity and getting into the groove of what we really want to do."

The other Preakness contenders moving on from the Kentucky Derby are Simplification, who was running last to finish fourth, and Happy Jack, who didn't do much running at all and finished 14th, beaten by 19 lengths.

Other "new shooters" who seem to have a case are Creative Minister, coming off an impressive allowance win at Churchill Downs, and Armagnac, who reversed a recent slide with a similar win at Santa Anita in his last outing.

Longer shots are Skippylongstocking, third in the Wood Memorial, and Fenwick, who comes from a last-place finish in the Grade I Blue Grass at Keeneland.

Skippylongstocking is 20-1 on the morning line and Fenwick is 50-1. But Asmussen knows better than anyone that once the gates spring open, odds are irrelevant.

Rich Strike was 80-1 on the tote board when he snatched away what would have been the Hall of Famer's first Kentucky Derby win.

"It would be great," Fenwick's trainer, Kevin McKathan, said of the potential for another big upset. "I think he'll probably go off at 80-1, actually. It would be awesome. This is one of those deals where you can stop and take a breath and say, 'You know what? We can do this. It can happen.'"

Sports News // 56 minutes ago
Serena Williams upset at Wimbledon, 'can't answer' retirement questions
June 29 (UPI) -- Tennis legend Serena Williams, a wild card at Wimbledon this year, was upset Tuesday in her first Grand Slam match in more than a year -- and said afterward that she couldn't give an answer when asked if she'll retire.

Sports News // 17 hours ago
Wimbledon tennis: Swiatek extends streak, Gauff rallies in first round
June 28 (UPI) -- Women's world No. 1 Iga Swiatek extended her winning streak to 36 consecutive matches in the first round of Wimbledon on Tuesday in London. Cori "Coco" Gauff and Paula Badosa were among the other top women to advance.

MLB // 1 day ago
MLB suspends 12, including interpreter, for Mariners-Angels brawl
June 28 (UPI) -- Major League Baseball issued a dozen suspensions, including an interpreter, for their roles in a brawl between the Los Angeles Angels and Seattle Mariners.

Lakers' Russell Westbrook to opt into $47M option for 2022