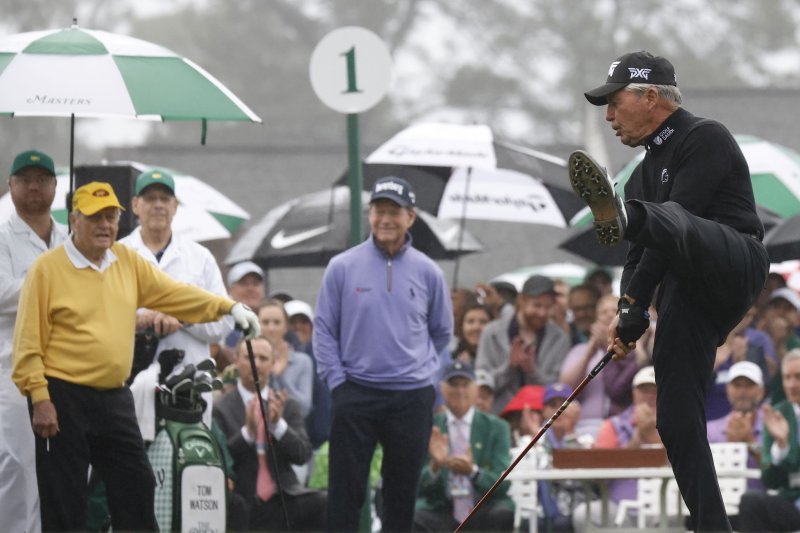 The golf legends were joined by a large crowd at 8:15 a.m. EDT on hole No. 1, adjacent to the clubhouse at Augusta National Golf Club. The annual ceremonial event, and the entire tournament, was delayed by 30 minutes due to overnight storms, which soaked the Augusta, Ga., course.

The 2022 Masters runs from Thursday through Sunday. The tournament will air on ESPN and CBS and stream on ESPN+, Masters.com and Paramount+.

Augusta National Golf Club announced in January that Watson accepted an invitation to join Nicklaus and Player as an honorary starter.

"I would like to say how honored I am to be with Gary and Jack," Watson said Thursday. "I've watched this ceremony many times in the past. ... To be a part of this thing, I'm truly humbled."

Nicklaus, Player and Watson combined to win 11 Green Jackets and made 140 Masters appearances over their decorated tenures. Watson, 72, won the 1977 and 1981 Masters Tournaments and totaled eight major tournament titles.

Player, who became an honorary starter in 2012, took the first stroke on tee No. 1. The South African, who in 1961 became the Masters' first international champion, ripped his drive down the fairway and punctuated the effort with a leg kick.

Player, 86, won three of his nine career major titles at the Masters.

Nicklaus, 82, hit the second drive. The "Golden Bear" eyed the fairway and smashed his shot down the right flank. Nicklaus won six of his record 18 major titles at Augusta.

Watson followed Nicklaus. He gave a hat tip to the gallery, joked with Player about how far he hit his drive and blasted a shot up the middle.

Nicklaus, Player and Watson then shared an extended hug to commemorate the moment.

The honorary starters tradition started with late golfers Jock Hutchison and Fred McLeod at the 1963 Masters. Lee Elder, the first Black golfer to play at the Masters, joined Nicklaus and Player as an honorary starter last April at Augusta. Elder died in November. He was 87.

Jose Maria Olazabal and J.J. Spaun walked to the tee box at the end of Thursday's ceremony to launch group play for the 91-player field for this year's major tournament.

Tiger Woods, Louis Oosthuizen and Joaquin Niemann are now set to tee off at 11:04 a.m. Thursday in Group 14. The final group, which features Matthew Fitzpatrick, Brooks Koepka and Rory McIlroy, will tee off at 2:33 p.m. Thursday at Augusta.

NBA // 3 hours ago
Liz Cambage to 'step away' from WNBA for 'healing, personal growth'
Aug. 15 (UPI) -- Four-time All-Star Liz Cambage will "step away" from the WNBA so she can focus on healing and personal growth, she announced Monday on Instagram.

Sports News // 7 hours ago
Texas Longhorns football legend Steve Worster dies at 73
Aug. 15 (UPI) -- Former Texas fullback Steve Worster, who is credited as a pioneer of football's wishbone offense, has died, the school announced. He was 73.