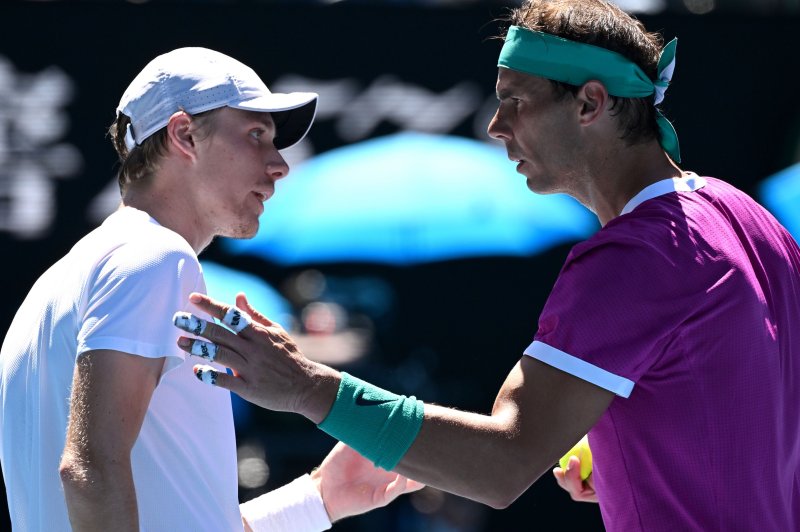 Denis Shapovalov of Canada (L) speaks to Rafael Nadal of Spain at the net about Nadal's delays during the quarterfinal match Tuesday in Melbourne. Photo by Dean Lewins/EPA-EFE

Jan. 25 (UPI) -- Canadian tennis player Denis Shapovalov accused officials of being "corrupt" at the 2022 Australian Open while playing in the against Spain's Rafael Nadal in the quarterfinals Tuesday in Melbourne.

Nadal won the first set and left the court to change clothes for the second. Chair umpire Carlos Bernardes called timeout to allow for the stoppage. Nadal returned to the court 45 seconds later as Shapovalov waited to serve.

Shapovalov approached Bernardes and told the official that Nadal should be penalized for the delay. Bernardes responded by saying that Shapovalov wasn't "ready to play, either," because of his conversation with the official.

"Are you kidding me? You guys are all corrupt," Shapovalov responded.

️ "You guys are all corrupt!"

Denis Shapovalov has unloaded on the chair umpire in a stunning outburst on Rod Laver arena. #AusOpen - Live on Channel 9 and 9Now pic.twitter.com/BUdTxut1Fc— Wide World of Sports (@wwos) January 25, 2022

Shapovalov also exchanged words with Bernardes after Nadal won the first game point. He asked the umpire why he was looking at him as Nadal served. The two players then met at the net for a brief exchange.

Shapovalov went on to drop the set 4-6. He followed with victories in two consecutive sets to even the match. Nadal was given a time violation in the fourth set. He then won the final set to advance and eliminate the Canadian from the competition.

Shapovalov told reporters that he "misspoke" when asked about his corruption comment, but also said that Nadal received preferential treatment.

"Every other match that I have played, the pace has been so quick because the refs have been on the clock after every single point," Shapovalov said.

"This one, I mean, after the first two sets, it was like an hour and a half just because he's dragged out so much after every single point. He's given so much time in between sets and all this."

He also said "boundaries" are needed for how long players can take breaks, which can disturb rhythm for opposing players.

"It's difficult. I mean, it was a big break after the fourth set and for this reason the momentum just goes away."

Nadal told reporters that Shapovalov was "wrong" for his accusation that he deliberately delayed the match. The 35-year-old cited his age, and said he was tired didn't feel well during the match.

Many players have taken breaks and changed clothes at the tournament due to the warm weather, with temperatures consistently in the mid-90s for daytime matches.

"I really believe that on the court you don't deserve better treatment than the others," Nadal said. "And I really don't want it, and I don't feel I have it."

Nadal, a 20-time Grand Slam champion, will face No. 7 Matteo Berrettini of Italy in the 2022 Australian Open semifinals. The winner will advances to the final, in which Nadal could become the winningest Grand Slam champion in men's tennis history.

MLB // 16 hours ago
Hunter Greene, MLB-worst Reds no-hit Pirates, still lose
May 16 (UPI) -- Rookie Hunter Greene and fellow Cincinnati Reds pitcher Art Warren combined for an eight-inning no-hitter, which resulted in a rare loss to the Pittsburgh Pirates in the finale of a four-game series.