Texas Tech radio announcers Brian Jensen and John Harris are suspended from Saturday's game due to their criticism of referees during the Raiders win last Saturday in Lubbock, Texas. Photo by Jay Hoes/Wikimedia Commons

Nov. 18 (UPI) -- Two Texas Tech radio announcers will be removed from calling the Red Raiders' game Saturday against Oklahoma State due to their recent on-air criticism of officials, the Big 12 announced.

The conference issued a public reprimand of play-by-play host Brian Jensen and analyst John Harris on Wednesday night. The duo worked the Red Raiders' 41-38 win over Iowa State on Saturday in Lubbock, Texas.

"I understand the roles of the play-by-play and color analyst," Big 12 commissioner Bob Bowlsby said in a news release. "However, as University representatives they also have an obligation to adhere to Conference policy regarding comments about game officials.

"The comments by the Red Raider Radio Network booth announcers were contrary to expected levels of respect and professionalism. Questioning the integrity of conference officials and specifically calling out members of the officiating crew is well beyond appropriate and permissible behavior."

Jensen and Harris were in the booth when officials overturned a potential interception by the Red Raiders with 7:25 remaining in Saturday's game.

Harris said that the Big 12 did "not want Iowa State to lose." Jensen responded by saying Bowlsby would "need to answer to this." He also said the referee crew was "in favor of Iowa State."

Texas Tech students threw trash on the field after the overturned call. Officials issued an unsportsmanlike conduct penalty to the Red Raiders due to the trash throwing. Jensen continued to criticize the officials and the conference. He also read off the names of each member of the officiating crew.

The Red Raiders (6-4) went on to win the game on a Jonathan Garibay 62-yard field goal as time expired. They face Oklahoma State (9-1) at 8 p.m. EST Saturday in Lubbock.

NBA // 8 hours ago
Statue of Kobe Bryant, daughter Gianna erected at site of 2020 helicopter crash
Jan. 26 (UPI) -- A statue of late Los Angeles Lakers great Kobe Bryant and his daughter, Gianna, was placed at the site of their helicopter crash in Calabasas, Calif., on Wednesday, two years to the day of their deaths and seven others.

NBA // 8 hours ago
Duncan Robinson, Miami Heat blow out New York Knicks
MIAMI, Jan. 26 (UPI) -- Sharpshooters got the Miami Heat off to a quick start and the NBA's Eastern Conference leaders never looked back in a dominant 110-96 victory over the New York Knicks Wednesday at FTX Arena.

NFL // 9 hours ago
Chiefs fans donate more than $250K to Buffalo children's hospital after playoff win
Jan. 26 (UPI) -- Just days after Kansas City handed the Bills one of the most crushing playoff losses in franchise history, Chiefs fans raised more than $250,000 for the Buffalo community. 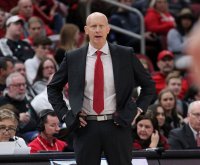