The USA women's volleyball team celebrates after defeating Brazil in straight sets to win the gold medal at the 2020 Summer Games on Sunday in Tokyo. Photo by Bob Strong/UPI | License Photo

Aug. 10 (UPI) -- Women drove the Americans to the top of the medal count at the 2020 Summer Games, while Team USA gymnasts were the most popular, according to data from Facebook and Twitter.

Women were responsible for nearly 60% of Team USA's Olympic-best 113 medals over 16 days in Tokyo. In total, 66 medals went to individual female athletes or women's teams from the United States.

A record-total 1,080 medals were handed out in Tokyo, an increase tied to new sports and disciplines in the Olympics program.

"I don't think I've ever been the fastest," Felix told NBC on Saturday. "I've never had the world records, but I've tried my best with what I had. That's all we want for women in the future."

Second-place finishes and disappointing, runner-up performances also were a common theme for Team USA. The Americans' 41 silver medals were the most earned by the United States at a Summer Games since the 1984 Olympics.

Team USA's success was expected, as the Americans have won the most Olympic medals in history and led the medal count in five of the previous six Summer Games.

Swimmer Caeleb Dressel, basketball star Kevin Durant and golfer Xander Schauffele were among men's favorites who came through with wins for Team USA.

Australian swimmer Emma McKeon collected the most medals among individual athletes at the Games, with seven. Dressel led Team USA with five medals -- all gold. McKeon's total tied the record for a female Olympian for a single Games, set by the Soviet Union's Maria Gorokhovskaya in 1952.

He set three Olympic records and an individual world record at the Games. He also was part of a relay team that set a world record.

Ledecky's six individual gold medals are the most for a woman in Olympic swimming history. She trails only Michael Phelps, who won 13, for the most individual Olympic gold medals in swimming.

Lee brought in the third-most medals among Americans, with a gold, silver and bronze from women's gymnastics. She was expected to be one of the top performers, even before Simone Biles' hiatus from the Games.

Surfer Moore and golfer Korda, both ranked No. 1 in the world in their respective sports, didn't disappoint in Tokyo. Moore beat South Africa's Bianca Buitendag for in the women's surfing gold medal match July 27 at Tsurigasaki Surfing Beach in Chiba, Japan.

Korda trailed early on in the women's golf tournament, but roared to the top of the leaderboard with a 9-under par 62 in the second round. She held onto the lead to win the tournament and became the first golfer in history, man or woman, to win gold and a major championship in the same year.

Schauffele, the No. 4 player in the Official World Golf Ranking, won the men's tournament the weekend before Korda's victory to give the Americans a sweep in the sport.

The United States Women's National Team entered the 2020 Summer Games as the favorite to win a gold medal, but underperformed throughout the soccer tournament. The Americans failed to score in three of six games and lost to Canada in the semifinals.

Despite the struggles, the Americans salvaged a bronze medal with a 4-3 win over Australia.

Team USA also came up short in baseball and softball. Both squads entered the Games as gold medal favorites, but lost to Japan in their respective gold medal contests.

Ace pitchers Cat Osterman and Monica Abbott powered the softball team to a 5-0 record going into the finals, but the Team USA offense never came alive. The Americans averaged fewer than two runs per game through the tournament and were on the wrong end of a 2-0 shutout in the gold medal contest.

The Team USA baseball team scored with ease through its run at the Games, but also suffered a 2-0 shutout loss to Japan in the gold medal game. Team USA's Triston Casas and Tyler Austin powered the American offense until they failed to produce at the plate when it mattered most.

Casas went 0 for 4 against Japan. Austin went 1 for 3 in the finale. Shortstop Nick Allen was the only Team USA player with more than one hit in the gold medal game.

She performed her first rotation in the vault as part of the women's team final but then withdrew from the event. Biles then withdrew from four additional events to focus on her mental health. She returned to finish third on the balance beam, the final gymnastics event.

Biles did not win a gold, but earned bronze and silver medals to tie Shannon Miller's career medal total of seven, the most among U.S. gymnasts.

The star gymnast earned 2.4 million Instagram followers, an increase of 53% from her previous count. She was the third most followed athlete overall, behind women's skateboarder Rayssa Leal of Brazil and men's track and field athlete Neeraj Chopra of India.

Lee, Dressel, McLaughlin and gymnast Jordan Chiles joined Biles as the most followed U.S. athletes from the Games. Lee saw her following increase by 511% on Instagram. Chiles gained 240,000 followers, an increase of 119% from her previous total.

Twitter reported that Biles also posted the most retweeted tweet from the Games from July 23 to Aug. 4, in the United States. More than 100,000 accounts retweeted her July 28 post, which thanked fans for their support during her hiatus.

The most-watched Twitter video from July 23 to Aug. 4 in the United States came from the United States Women's National Team win over the Netherlands in the quarterfinals of the soccer tournament. The video, which features goalie Alyssa Naeher making several clutch saves, received more than 2 million views.

Naeher DID IT AGAIN in penalties to help the @USWNT reach the #TokyoOlympics semifinals! #OlympicHERstory pic.twitter.com/9RDaFMKrVx— #TokyoOlympics (@NBCOlympics) July 30, 2021

The most tweeted-about event overall was Rayssa's silver medal win in women's street skateboarding. At age 13, she was the most mentioned athlete on Twitter. Biles was second.

Olympic competition returns in just six months with the 2022 Winter Games in Beijing. The Summer Games and Winter Games are typically separated by two years, but moved closer when the Tokyo Olympics were postponed by one year due to COVID-19.

The 2020 Summer Games featured 339 events, the most ever for an Olympics, but the 2024 version in Frances will offer fewer events. Softball, baseball and karate will not return to the sports lineup. Break dancing will be added in 2024.

Faces of the Olympics: expressions from the Games 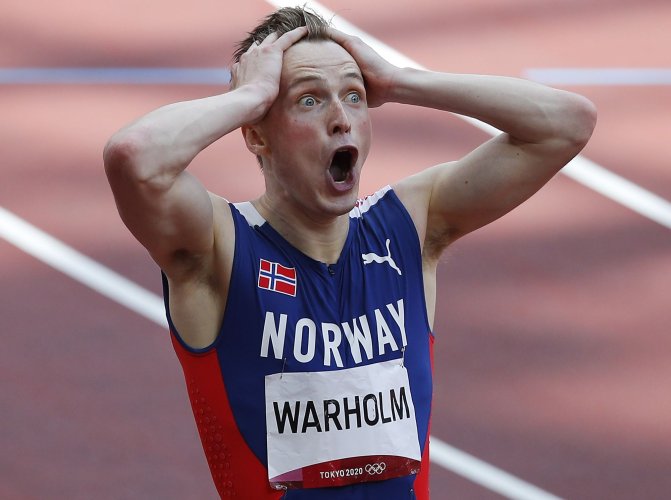 NFL // 4 hours ago
Bengals-Titans, 49ers-Packers start weekend's NFL divisional round
MIAMI, Jan. 20 (UPI) -- The Tennessee Titans host the Cincinnati Bengals on Saturday in the first divisional round of the 2022 NFL playoffs. Six more teams will take the field to determine who plays in the respective AFC and NFC title games.

NFL // 19 hours ago
Eagles plan to bring back QB Jalen Hurts as 2022 starter
Jan. 19 (UPI) -- The Philadelphia Eagles intend to bring back Jalen Hurts as their starting quarterback in 2022, despite his struggles as a passer in 2021, general manager Howie Roseman and coach Nick Sirianni told reporters Wednesday.

NBA // 21 hours ago
Lusia Harris, only woman officially drafted by NBA team, dies at 66
Jan. 19 (UPI) -- Lusia Harris, the only woman to ever be officially selected in an NBA Draft, died unexpectedly, her family said in a statement. She was 66.

NFL // 23 hours ago
Cowboys QB Dak Prescott says 'sorry' for NFL referee criticism
Jan. 19 (UPI) -- Dak Prescott "deeply regrets" critical comments he made about officials and is "sorry" for condoning fans throwing objects onto the field after the Dallas Cowboys' playoff loss to the San Francisco 49ers, he tweeted.
Advertisement