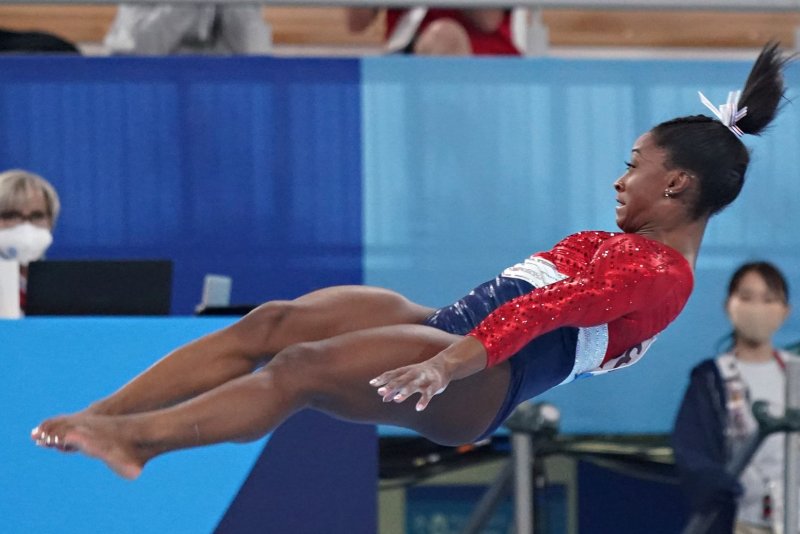 Simone Biles of the United States competes in the vault in the women's all-around team final at the 2020 Summer Games on Tuesday in Tokyo. Photo by Richard Ellis/UPI | License Photo

USA Gymnastics announced Biles' decision to pull out of the events after a review with medal staff.

"She will continue to be evaluated daily to determine whether to compete in the finals for floor exercise and balance beam," USA Gymnastics said. "MyKayla Skinner, who had the fourth highest score in vault during qualifications, will compete in vault finals for the U.S. alongside Jade Carey, who finished with the second highest score.

"We remain in awe of Simone, who continues to handle this situation with courage and grace, and all of the athletes who have stepped up during these unexpected circumstances."

Biles, widely regarded as the greatest women's gymnast in history, completed one rotation on the vault as part of the women's all-around team final Tuesday in Tokyo before she pulled out of that event.

She later told reporters that she didn't trust herself. She also said in a video posted on social media that she had the "twisties," a gymnastics term that describes getting lost in the air during routines, which can lead to serious injuries.

She said it can take at least two weeks to overcome the "twisties."

"I don't think you realize how dangerous this is on hard/competitive surface," Biles wrote Thursday on Instagram.

Biles also withdrew from Thursday's all-around individual final. Team USA's Suni Lee went on to win a gold medal in that event. Biles watched from the sideline as Lee and Carey competed in that event.

Lee, Grace McCallum and Jordan Chiles managed to claim a silver medal for the team despite Biles' withdrawal.

Sports News // 2 days ago
Ohio Derby, Irish Derby, Breeders' Cup qualifiers in 3 countries on weekend card
June 24 (UPI) -- Weekend horse racing has an international flavor with top races on three continents, but much of it points back to November's Breeders' Cup World Championships in the Kentucky Blue Grass.