Team USA gymnast Simone Biles practices her routine on the balance beam for the 2020 Summer Games on Thursday in Tokyo. Photo by Richard Ellis/UPI | License Photo

July 23 (UPI) -- Gymnast Simone Biles always is a must-watch, but dozens of other Team USA athletes will pique your interest at the 2020 Summer Games. That list includes return competitors and first-time Olympians.

The array of events, viewing options and 13-hour time difference between Japan and Eastern Daylight Time will make it tricky to know when to watch.

Here are five must-watch athletes from Team USA and a list of others you should find time to tune in for:

Biles is regarded to be arguably the greatest gymnast of all time. The four-time gold medalist looks to make more history in Tokyo and is the favorite to win nearly all of her events. Biles showed off her Yurchenko double pike multi-flip at recent practice -- a move never performed by a woman at the Summer Games.

She teamed-up with fellow ace pitcher Monica Abbott to throw a one-hit shutout to open the Summer Games with a win over Italy on Wednesday. Abbott led Team USA to another win Thursday over Canada.

The Americans won gold in three of the four previous Summer Games. They are heavy favorites to earn another title in this Olympics, the first Summer Games that includes softball since 2008.

Huston, 26, is well-known on the skateboarding circuit. He also is a favorite to win gold in Tokyo as the sport makes its Summer Games debut. Huston sits at No. 1 in the Olympic World Skateboarding Rankings. He is a 12-time X Games gold medalist.

Felix can tie an Olympic legend if she performs well at the 2020 Summer Games. The nine-time Olympic medalist will make her fifth Olympic appearance this month. She can tie fellow track great Carl Lewis' record for the most Olympic medals by an American track athlete if she earns one medal in Tokyo.

Felix, 35, qualified for the women's 400-meter race. She is also expected to participate in the 4x400-meter mixed relay and women's 4x400-meter relay.

Brazilians Gabriel Medina and Italo Ferreira are the favorites to win gold in men's surfing. American Carissa Moore is among the favorites on the women's side.

The surfing competition takes place at Tsurigasaki Beach, about 90 minutes southeast of Tokyo. Surfers will be judged on a scale of 0 to 10 on each wave they hit. Times and dates for the competition are tentative and could change based on weather and water conditions. 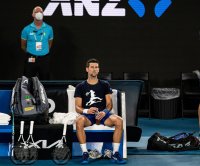