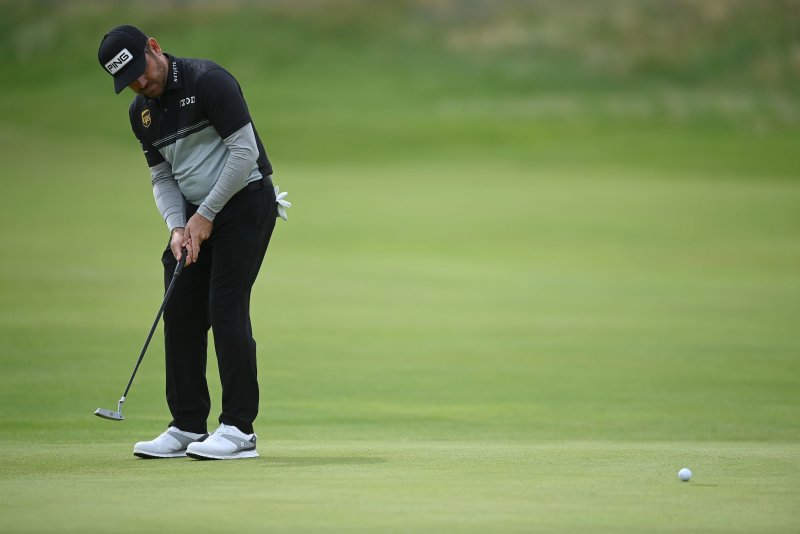 Louis Oosthuizen of South Africa putts on the seventh hole during the first round of The British Open golf championship on Thursday at Royal St. George's in England. Photo by Neil Hall/EPA-EFE

July 15 (UPI) -- Louis Oosthuizen climbed to the top of the leaderboard after Thursday's first round of the 2021 British Open at Royal St. George's in Kent, England.

Oosthuizen, who finished as the runner-up in the last two majors, saved par from a fairway bunker on hole No. 18 for a 6-under 64 in the opening round. That tied the lowest first round at Royal St. George's, which was previously set in 1981 by Christy O'Connor Jr.

The 38-year-old Oosthuizen, a native of South Africa, opened the day with seven straight pars before carding six birdies on his next nine holes. He ended with pars on the 17th and 18th holes to take a 1-shot lead over the field.

"I've learned over the years playing major championships that patience is the key thing," said Oosthuizen, who has six runner-up finishes in major tournaments since winning the British Open at St. Andrews in 2010.

Oosthuizen was one shot ahead of Americans Jordan Spieth and Brian Harman, who were tied for second at 5-under par. Spieth had six birdies to one bogey, while Harman carded seven birdies and two bogeys.

Benjamin Hebert, Webb Simpson, Dylan Frittelli, Mackenzie Hughes and Stewart Cink were a shot back of Spieth and Harman at 4-under 66.

Collin Morikawa, Justin Rose and Tommy Fleetwood were among the nine-man group tied for ninth at 3-under 67.

U.S. Open champion Jon Rahm, the betting favorite to win this week at the British Open, opened with a 71 after making a double-bogey at the ninth hole, where he took two shots to get out of a pot bunker in the fairway.

Bryson DeChambeau, who angered Cobra Golf representatives when he blamed his driver for his poor performance in the first round, also opened at 1-over 71. He hit just four of 14 fairways at the course off Sandwich Bay.

DeChambeau later apologized for his comments, saying he was "unprofessional" and his emotions got the best of him.

Rory McIlroy birdied his last hole to salvage a 70 in his attempt to win a major title for the first time in seven years. Justin Thomas opened with a 72, while Phil Mickelson shot 80, his highest start ever in the tournament.

Defending British Open champion Shane Lowry also shot 71 on what he called a "very special day" due to the return of the event. With the cancellation of last year's British Open because of the COVID-19 pandemic, Lowry was unable to defend his title at the major tournament.

In the British Open's return, the field competed in front of a crowd that has a daily capacity of 32,000 this week.

"I feel like the fans here are very knowledgeable about the sport, and they're also having a great time," Spieth said.

The second round of the 149th British Open tees off at 1:35 a.m. EDT Friday at Royal St. George's Golf Course.

Zach Johnson tests positive for COVID-19, pulls out of The Open golf tournament