June 14 (UPI) -- Ex-UFC champion Tyron Woodley says he learned several lessons from Floyd Mayweather's bout against Logan Paul and will train with the undefeated boxer ahead of his debut in the sport Aug. 28 against Jake Paul.

"What I learned from that fight is don't let somebody over gas you up and under play themselves and make themselves seem common and casual so the fans see you just hanging in there to be the biggest victory on earth," Woodley told UPI last week, in reference to Mayweather's fight against Logan on June 6.

The Mayweather-Logan Paul fight gave Woodley a unique advantage as he heads into his boxing debut. Mayweather (5-foot-8) and Woodley (5-foot-9) are similar in height, but Woodley outweighs Mayweather.

Logan used his weight and height to his advantage in the fight against Mayweather, which did not feature judges or name an official winner.

Mayweather admitted that Logan used his longer reach and power to his advantage, but the boxer still managed to avoid most of his haymakers.

Woodley said he took Mayweather's team up on their offer to train him for his fight against Jake. He plans to start training with the Mayweather team in the upcoming months.

"I [already] picked some things up from him that I can't really share because it's something that that if I mention it could impact the outcome."

Woodley said he won't look past his first opponent, but plans to continue with his boxing career after the fight.

"He has the ability to knock me out and he's been boxing more than me," Woodley said of Jake. "I'm just mentally getting prepared for not just fighting him, but building a foundation to box other people, especially former greats and future current greats in boxing.

"I have a ways to go, but maybe I'm ahead of him because of my combat sports [history]."

The Jake Paul-Tyron Woodley bout will air on Showtime Pay-Per-View. Paul (3-0) is a slight favorite to win. 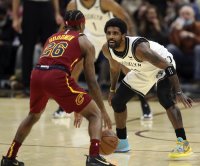 NBA // 14 hours ago
Kyrie Irving says he 'would've won' more titles with Cavs, LeBron; cites maturity
May 17 (UPI) -- Brooklyn Nets guard Kyrie Irving says he would have won more championships with LeBron James and the Cleveland Cavaliers if he had the "same maturity line" and understanding of himself he does now.