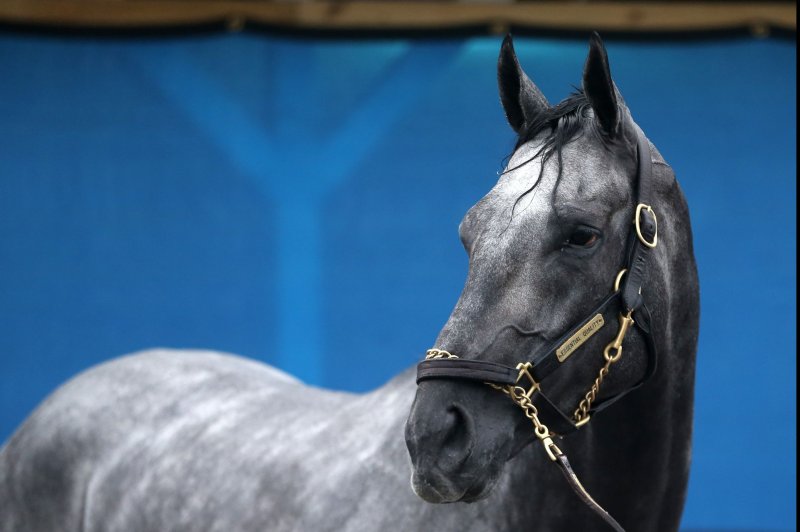 Hot Rod Charlie's owners were firm in the decision not to run in the Preakness just two weeks after the Derby. Photo by John Sommers II/UPI | License Photo

Rock Your World, the Santa Anita Derby winner, saw his chances dashed early in Kentucky Derby when he was squeezed and shuffled to the back of the big field. File Photo by John Sommers II/UPI | License Photo

Known Agenda, ninth in the Kentucky Derby, is the most highly regarded on the morning line of three Belmont starters trained by Todd Pletcher. File Photo by John Sommers II/UPI | License Photo

June 2 (UPI) -- A field of eight is set for the Saturday's Grade I Belmont Stakes, the third leg of the Triple Crown, with several of the 3-year-olds looking to improve on their performance in the Kentucky Derby.

Not only will there will be no Triple Crown sweep this year after Medina Spirit won the Run for the Roses and Rombauer took the Preakness Stakes, but the makeup of the Belmont field means not a single horse will have competed in all three races.

Medina Spirit, whose Derby victory is in doubt after two positive post-race drug tests, did not contest the Preakness and is not entered for the Belmont.

Rombauer did not run in the Derby, and then posted an upset win in the Preakness. He is the second choice on the Belmont morning line at 3-1, but the favorite is Essential Quality at 2-1.

The Tapit colt entered the Kentucky Derby undefeated, but finished fourth after being bumped early and forced to race wide. He skipped the Preakness.

Also drawing support are Hot Rod Charlie and Rock Your World, who reported third and 17th, respectively, at Churchill Downs.

Rock Your World, the Santa Anita Derby winner, saw his chances dashed early in the Run for the Roses when he was squeezed and shuffled to the back of the big field.

With a decent start in a more compact group, he is expected to be the early leader in the 1 1/2-mile Belmont Stakes, likely with company from Hot Rod Charlie.

The latter's trainer, Doug O'Neill, said drawing the No. 4 gate, three inside Rock Your World, would not have been his ideal scenario.

"In an ideal world, we wanted to be to the outside of Rock Your World since he figures to be leaving there pretty hard," O'Neill said. "But that didn't happen. We're just grateful to be in the gate."

O'Neill said Hot Rod Charlie's owners were firm in the decision not to run in the Preakness just two weeks after the Derby, calling them "very patient and conservative."

Known Agenda, ninth in the Kentucky Derby, is the most highly regarded on the morning line of three Belmont starters trained by Todd Pletcher.

Pletcher said the colt "has been doing great" and, like his stablemates, will benefit if a pace battle develops.

"I think the real key is we need an honest pace, and there are three or four horses in here who will try to be prominently placed early," Pletcher said. "If they set an honest pace, I think that will help all three of mine."

The race has a bit of international intrigue with France Go De Ina, based in Japan, returning from a seventh-place finish in the Preakness. Before that, the Kentucky-bred Will Take Charge colt was sixth in the Group 2 UAE Derby in Dubai.

UAE Derby winner Rebel's Romance is at New York's Belmont Park and was expected to contest Saturday's race, but was not entered. At the last moment, owner Godolphin Racing reported he has a leg infection.

Trainer Charlie Appleby said Rebel's Romance has not been able to shake the infection, adding, "There's just no point in going there with only 75 percent of a horse, so we'll give this a swerve and regroup and find another event for him."

The field for the Grade I Belmont Stakes, presented by NYRA Bets, by post position with morning-line odds, jockey and trainer: