April 30 (UPI) -- Top 2022 men's basketball recruit Emoni Bates, widely considered one of the best high school prospects in the past decade, has decommitted from Michigan State and reopened his recruitment.

"I would like to thank [Spartans head coach] Tom Izzo and the coaching staff at Michigan State but I have decided to reopen my recruitment," Bates wrote Friday on Instagram. "I'm not sure what my future holds but I am keeping all of my options open, both college and pro."

Bates could now decide to go to the developmental G League for a year before making the jump to the NBA. The top prospect in the 2020 class, Jalen Green, opted to go that route, as well as elite recruits Jonathan Kuminga, Isaiah Todd and Daishen Nix.

When Bates initially committed to the Spartans, he told ESPN he didn't plan to take the G League path.

The 17-year-old Bates, who is a junior, switched high schools last summer. He plays for Ypsi Prep Academy in Michigan, which was created by his father, Elgin. 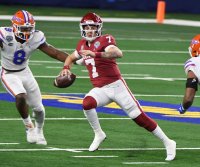 NBA // 13 hours ago
Nuggets' Michael Porter to have potential season-ending back surgery
Nov. 29 (UPI) -- Denver Nuggets forward Michael Porter Jr. will undergo surgery on his lower back Wednesday, which could end his 2021-22 season.