Six officials have been sent home from the 2021 NCAA Division I men's basketball tournament because of a positive COVID-19 test. File Photo by Bill Greenblatt/UPI | License Photo

March 16 (UPI) -- Six referees for the 2021 NCAA Division I men's basketball tournament have been removed because one of them tested positive for COVID-19, college sports' governing body said.

"The NCAA has replaced several officials for March Madness because of a positive COVID-19 test," the NCAA said Monday in a statement. "One official tested positive Monday, and five other officials the person interacted with the day before were identified as exposure risks due to prolonged close contact.

"Based on tournament protocols and contact tracing with local public health authorities, these officials may not participate in the tournament."

The NCAA said four replacement officials have been "previously approved and meet the pre-tournament testing protocols." Two of the officials will not be replaced.

Teams started to arrive for the tournament Monday in Indianapolis. Tournament games start Thursday and end April 5. Sixty-eight teams are in the tournament field. The tournament follows a turbulent regular season in men's and women's college basketball, which featured hundreds of games that had to be canceled or rescheduled due to positive COVID-19 tests.

Several teams have COVID-19 issues just days ahead of their first-round games. Virginia coach Tony Bennett said Sunday that most of his players are in quarantine because of a positive COVID-19 test within the Cavaliers men's basketball program. The Virginia players are expected to be in quarantine until Thursday and will travel to Indianapolis on Friday.

The Kansas men's basketball team also had a positive COVID-19 test result surface Friday and was forced to withdraw from the Big 12 tournament. The Jayhawks arrived in Indianapolis on Monday.

Teams in the 2021 Division I men's basketball tournaments have until Tuesday night to announce replacement teams for their first-round games if they don't have the required five players available to compete. Louisville is expected to be the top replacement team that could enter the tournament if another team has to drop out Tuesday.

About sixty officials are scheduled to work this year's tournament, compared to a field of 100 officials in past years. 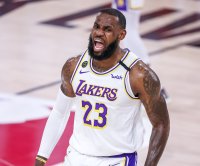 Sports News // 12 hours ago
Tiger Woods doesn't expect full-time return to PGA Tour
Nov. 30 (UPI) -- Tiger Woods spoke publicly Tuesday for the first time since his February car crash and told reporters he doesn't expect to return to a full practice and event schedule on the PGA Tour because of back and leg injuries.