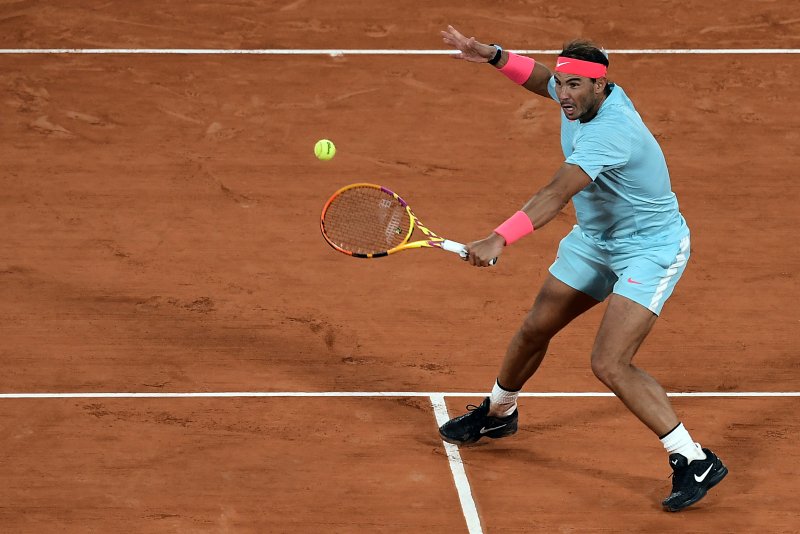 Diego Schwartzman (pictured) will battle Rafael Nadal in a French Open men's semifinal after he beat No. 3 Dominic Thiem in the quarterfinals Tuesday in Paris. File Photo by Ray Stubblebine/UPI | License Photo

Oct. 7 (UPI) -- Rafael Nadal is now just one win away from playing for his 13th French Open title after a straight-sets win over Italian Jannik Sinner in Paris.

Nadal beat Sinner 7-6 (4), 6-4, 6-1 in the quarterfinals on Tuesday at Roland Garros. He will face Argentine Diego Schwartzman in the semifinals Friday.

Schwartzman beat Nadal in straight sets on Sep. 19 at the 2020 Italian Open, his only win over Nadal in 11 career matches.

"I have two days to practice the things that I need to improve on. That's what I'm going to do," Nadal told reporters.

Nadal dispatched of Sinner in two hours and 49 minutes. He had one double fault, won six of eight break points, fired 37 winners and had 33 unforced errors. Sinner had three double faults, 31 winners and 44 errors.

Sinner and Nadal went back and forth in the first set before Sinner won the 10th and 11th game. Nadal then forced a tie break before he won the 72-minute set on a Sinner unforced error.

Nadal dominated the third set and won the first four games before Sinner claimed the fifth game. The Spaniard fired a winner to claim the sixth game before he broke Schwartzman to win match point.

"If I see the history, I'm 10-1 down [in matches against Nadal]," Schwartzman said. "I'm not sure if I'll have a lot of confidence, but I know that I can beat him."

No. 1 Novak Djokovic faces No. 17 Pablo Carreno Busta on Wednesday for a spot in the semifinals. No. 5 Stefanos Tsitsipas also battles No. 13 Andrey Rublev in a Wednesday quarterfinal.

The women's semifinals start Thursday with Iga Swiatek in a match against Nadia Podoroska. American's Danielle Collins and Sofia Kenin match up Wednesday in a women's quarterfinal. The winner of that match will face Petra Kvitova in the semifinals.

Kvitova -- the No. 7 seed -- beat Laura Siegemund in straight sets Wednesday to reach the semifinals.

The women's singles final is Saturday at Roland Garros. The men's final is Sunday.