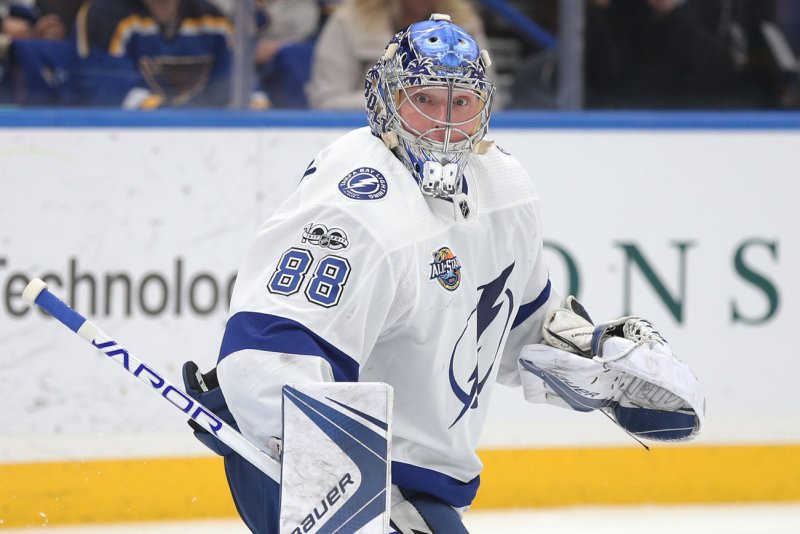 Goaltender Andrei Vasilevskiy and the Tampa Bay Lightning own a 2-1 lead on the Dallas Stars in the 2020 Stanley Cup Final as the series enters Game 4 Friday in Edmonton, Alberta, Canada. File Photo by Bill Greenblatt/UPI | License Photo

Miami Heat guard Goran Dragic has averaged a team-high 21.8 points per game against the Boston Celtics in the 2020 Eastern Conference finals ahead of Game 5 of the series Friday in Orlando, Fla. Photo by Erik S. Lesser/EPA-EFE

Sept. 25 (UPI) -- The 2020 Stanley Cup Final leads all sports action this weekend as the Tampa Bay Lightning face the Dallas Stars for the title in Canada. The NBA playoffs and the first round of the French Open also pack the schedule.

Dozens of NFL and college football games, a NASCAR Cup Series race, a UFC bout and the end of the Major League Baseball season will join the aforementioned trio of main events this weekend on TV, computer, tablet and smartphone screens around the United States.

The Stars and Lightning face off in Game 4 of the Stanley Cup Final on Friday at Rogers Place in Edmonton, Alberta. Tampa Bay is favored the win the title and holds a 2-1 series lead on Dallas. The Stars won Game 1 before the Lightning stole momentum with back-to-back wins ahead of Game 4.

"We have had contributions from everyone through these playoffs," Lightning center Brayden Point told reporters Thursday.

"Some guys are asked to score goals. ... I think the strength of our team has been the depth. Even if guys aren't scoring they are setting up the next shift."

Point has a playoff-high 11 goals. His teammates Victor Hedman and Ondrej Palat have the second-most goals in the playoffs, with 10 scores. Stars center Joe Pavelski also has 10 scores this postseason. Lightning right wing Nikita Kucherov has a playoff-high 23 assists.

The Miami Heat and Los Angeles Lakers each are one win away from clinching spots in the 2020 NBA Finals.

Miami owns a 3-1 series lead on the Boston Celtics in the Eastern Conference finals. Game 5 of the series is at 8:30 p.m. EDT Friday in Orlando, Fla., and airs on ESPN.

The Celtics are favored to win Game 5 and force a Game 6, which would be played Sunday if necessary. The Heat won the first game of the series on Sept. 15 before they took a 2-0 series lead with another win on Sept. 17. The Celtics then cut into the lead with a vital Game 3 triumph on Saturday in Orlando.

Heat rookie Tyler Herro scorched the Celtics for 37 points to spark a Game 4 victory on Wednesday, which put the Heat in range of a trip to the NBA Finals. Heat All-Star Bam Adebayo was injured during Wednesday's win, but is expected to be ready for Game 5.

The Heat have used a balanced approach to obtain their series lead, with three different players who have led the team in scoring in the three victories.

"That's just how we're built," Heat coach Erik Spoelstra said Thursday. "We don't have a team where somebody is going to score 50 points.

"Boston's defense is really good. You're going to have to have different guys step up, and based on that particular game, it might be different guys than the previous game. That's what you've seen so far."

The Los Angeles Lakers also own a 3-1 lead over the Denver Nuggets in the Western Conference finals. The Lakers and Nuggets face off in Game 4 at 9 p.m. EDT Saturday in Orlando. If necessary, Game 6 will be on Monday. That series airs on TNT.

The final Grand Slam of 2020 is underway in Paris as top tennis stars crash the clay courts of Roland Garros. Men's and women's qualifiers wrap up Friday before the first round begins on Sunday.

Twelve-time champion Rafael Nadal is favored to win the event. The Spaniard -- ranked No. 2 in the world -- battles Egor Gerasimov on Sunday in Paris.

Men's world No. 1 Novak Djokovic faces Mikael Ymer in his first round match. No. 3 Dominic Thiem -- the 2020 U.S. Open champ -- faces Marin Cilic in the first round. No. 4 Roger Federer is not in the field for the Grand Slam due to a knee injury.

No. 2 Simona Halep -- the 2018 champion -- is favored to win the 2020 singles title. Halep has a first-round match against Sara Sorribes Tormo Sunday in Paris. No. 3 Elina Svitolina battles Varvara Gracheva in the first round.

First-round matches air from Sunday through Tuesday on NBC and the Tennis Channel.

Kansas State at Oklahoma at noon EDT on Fox

Florida at Ole Miss at noon EDT on ESPN

Kentucky at Auburn at noon EDT on SEC Network

UCF at East Carolina at noon EDT on ABC

Louisville at Pittsburgh at noon EDT on ACC Network

Georgia Southern at Louisiana at noon EDT on ESPN2

West Virginia at Oklahoma State at 3:30 p.m. EDT on ABC

Georgia at Arkansas at 4 p.m. EDT on SEC Network

Alabama at Missouri at 7 p.m. EDT on ESPN

Tennessee at South Carolina at 7:30 p.m. EDT on SEC Network

NC State at Virginia at 8 p.m. EDT on ACC Network

Texans at Steelers at 1 p.m. EDT on CBS

Bengals at Eagles at 1 p.m. EDT on CBS

Raiders at Patriots at 1 p.m. EDT on CBS

Titans at Vikings at 1 p.m. EDT on CBS

Washington Football Team at Browns at 1 p.m. EDT on Fox

Bears at Falcons at 1 p.m. EDT on Fox