Kevin Kisner recorded seven birdies in the opening round of the Rocket Mortgage Classic on Thursday. File Photo by John Angelillo/UPI | License Photo

July 2 (UPI) -- Doc Redman, who is searching for his first PGA Tour win, shot a 7-under 65 in Thursday's opening round of the Rocket Mortgage Classic to share the lead with Scott Stallings and Kevin Kisner.

Redman, 22, finished with four consecutive birdies -- including seven over his last eight holes -- at the Detroit Golf Club. Stallings also had eight birdies and one bogey, while Kisner had seven birdies.

At the Travelers Championship last week, Redman -- who finished second at the inaugural Rocket Mortgage Classic last year -- closed with a 63 to tie for 11th, his best finish this season. In the week before that, he tied for 21st at the RBC Heritage.

"I've come off two good finishes and a really good finish last year at this event, which has never really happened to me," Redman said. "So, I've never had this kind of expectation externally or even internally."

Bryson DeChambeau, the only player with top-10 finishes in each of the past three events, topped the group sitting one shot back of the lead. He surged up the leaderboard with four birdies and an eagle over an eight-hole stretch on the back nine.

DeChambeau recorded four bogeys, though, including one on hole No. 18 after pushing an 8-foot putt to the right.

"That really got me a little agitated," DeChambeau said. "It's going to put a little fire in my belly."

Rickie Fowler, who failed to make the cut in the two tournaments he has played since the PGA Tour's restart, shot a 5-under 67 and was among the group another shot back.

MLB // 13 hours ago
MLB: Pitchers to face ejections, 10-game bans for foreign substance use
June 15 (UPI) -- MLB pitchers will be ejected and receive 10-game suspensions for the use of foreign substances on baseballs as part of an expanded policy to prevent competitive advantages in the game, the league announced Tuesday.

NBA // 18 hours ago
76ers' Joel Embiid "won't be 100%" until off-season as Hawks tie series
June 15 (UPI) -- All-Star center Joel Embiid says he won't be 100% healthy until the off-season after he struggled to produce over long stretches during the Philadelphia 76ers' Game 4 loss to the Atlanta Hawks. 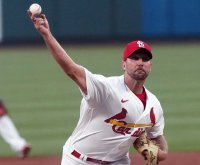 MLB // 19 hours ago
Adam Wainwright carries Cardinals over Marlins, back to .500
June 15 (UPI) -- Veteran pitcher Adam Wainwright held the Miami Marlins to just four hits and two runs over six innings to help the St. Louis Cardinals earn their latest win and push their season record back to .500.
Advertisement