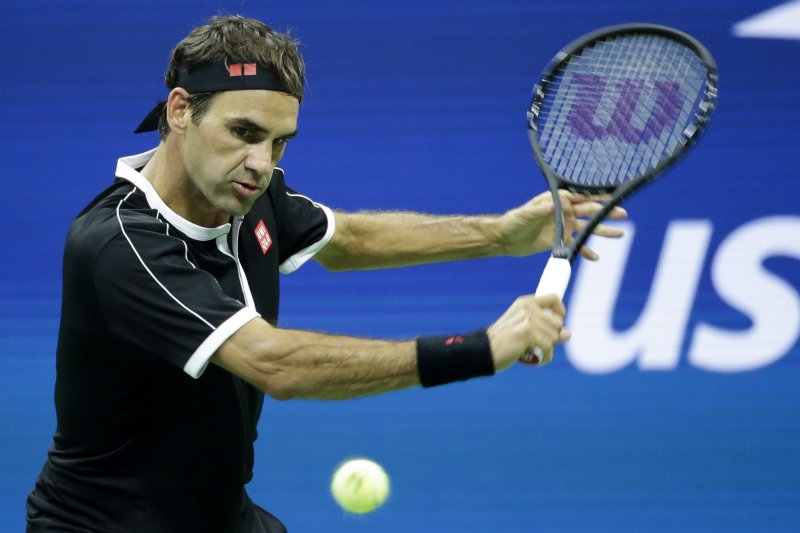 Roger Federer has been active on social media as professional tennis is indefinitely suspended due to the coronavirus pandemic. File Photo by John Angelillo/UPI | License Photo

April 8 (UPI) -- Lindsey Vonn, Sofia Kenin and actor Hugh Jackman were among the celebrities to respond to an online tennis lesson posted by Roger Federer on social media. Their results were mixed.

Federer posted a 59-second clip of himself rapidly knocking a tennis ball against a wall at his house Tuesday on Twitter and Instagram. He sported white shoes, white pants, a white jacket and a white fedora for the drill.

"Here's a helpful solo drill," Federer wrote for the caption. "Let's see what you got! Reply back with a video and I'll provide some tips. Choose your hat wisely."

Many social media users responded with their own versions of the workout. Federer also offered tips to some of his virtual students, telling them to not lean back and to keep their wrists strong. His Instagram video had 2.4 million views and his Twitter video had nearly 2 million views as of Wednesday morning.

RELATED Roger Federer shows off post-surgery trick shots in snow
The 20-time Grand Slam champion had right knee surgery in February. He posted a video in March showing off some trick shots while in the snow. The men's and women's professional tennis tours are suspended until at least July due to the coronavirus pandemic.

Vonn used a garage door and a dog tennis ball toy for her workout.

"Challenge attempted," Vonn wrote for the caption on her video of the drill. "I'm definitely not doing this right, but anything for you Rog! Can you give me lessons via Skype please? Might help if I got an actual tennis ball and not a wet dog toy."

Jackman did his Federer-inspired workout by running up sets of stairs in New York City. He said he didn't have a tennis court available.

Djokovic -- the No. 1 men's player in the world -- also made the drill look easy, before asking Federer if it was "good enough." He posted the video of the drill to his Instagram story.