Iowa's Luka Garza, Marquette's Markus Howard and Seton Hall's Myles Powell were also named finalists on Wednesday for the award given annually to the most outstanding player in the country in men's basketball. Ionescu's teammate Ruthy Hebard, Baylor's Lauren Cox, South Carolina's Tyasha Harris and Kentucky's Rhyne Howard are the other women's finalists.

Toppin is a front-runner for the men's honor. He averaged 20 points and 7.5 rebounds while leading the Flyers to the No. 3 ranking in the country. Ionescu -- the reigning women's Wooden Award winner -- averaged 17.5 points, 9 assists and 8.6 rebounds per game for the No. 2 Ducks.

Howard was the best scorer in the nation this season in men's basketball, averaging 27. 8 points per game. Garza posted 23.9 points and 9.8 rebounds per game. Powell averaged 21 points per game for Seton Hall.

Toppin -- a sophomore -- announced last week that he planned to sign with an agent and enter the 2020 NBA Draft. Azubuike, Howard and Powell are seniors.

The 44th annual Wooden Award presentation for the most outstanding women's player will be given at 5 p.m. EST Monday on ESPN. The men's award will be presented at 5 p.m. EDT Tuesday on ESPN.

Former Duke star Zion Williamson won the 2019 men's Wooden Award before becoming the No. 1 overall pick in the 2019 NBA Draft. Ionescu this season became the first player in NCAA history -- men's or women's -- to accumulate 2,000 career points, 1,000 career rebounds and 1,000 career assists. The three-time Pac-12 Player of the Year could become the fourth player in history to win two consecutive Wooden Awards.

Both the men's and women's basketball seasons was shortened due to the coronavirus pandemic, with the NCAA canceling their respective 2020 Division 1 basketball tournaments on March 12. 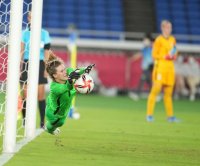 Soccer // 12 hours ago
Olympics: Alyssa Naeher leads U.S. past the Netherlands in soccer quarterfinal
July 30 (UPI) -- Goalie Alyssa Naeher provided clutch saves in extra time and a penalty shootout to spark a win over the Netherlands and send the U.S. women's soccer team to the 2020 Summer Games semifinals Friday in Yokohama, Japan. 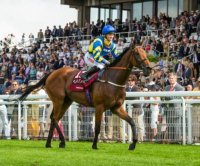