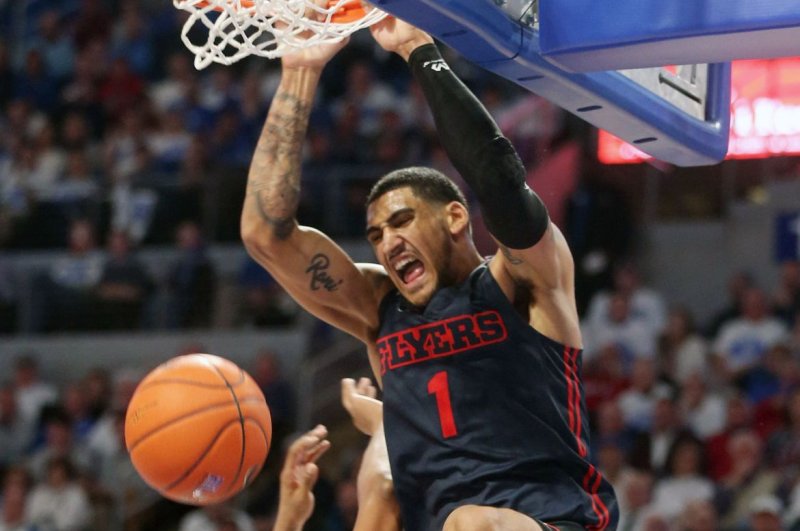 Obi Toppin and the University of Dayton had the best season in school history in 2019-2020, but won't be able to compete for a national championship after the NCAA Division I men's basketball tournament was canceled Thursday. File Photo by Bill Greenblatt/UPI | License Photo

March 12 (UPI) -- The NCAA canceled its winter and spring championships Thursday -- including the Division I men's and women's basketball tournaments -- in the wake of the coronavirus outbreak.

"Today, NCAA president Mark Emmert and the Board of Governors canceled the Division I men's and women's 2020 basketball tournaments, as well as all remaining winter and spring NCAA championships," the NCAA said.

"This decision is based on the evolving COVID-19 public health threat, our ability to ensure the events do not contribute to spread of the pandemic and the impracticality of hosting such events at any time during this academic year given ongoing decisions by other entities."

College sports' governing body joined several major sports leagues that are altering plans as a result of the outbreak.

The NCAA announced Wednesday that it planned to hold the tournament without fans being admitted into arenas. On Thursday morning, all of the scheduled men's conference tournaments were canceled due to the outbreak.

Traditional college basketball powerhouses Duke and Kansas announced they were suspending all athletic competition for the foreseeable future. Dozens of NCAA member schools have shut down their campuses to in-person classes in the last week.

The 2020 NCAA Division I tournament was scheduled to begin Tuesday.

MLB Commissioner Rob Manfred held a conference call with representatives from all 30 teams, and he consulted the Major League Baseball Players Association before making the announcement.

"Nothing is more important to us than the health and safety of our players, employees and fans," MLB said in a news release. "MLB will continue to undertake the precautions and best practices recommended by public health experts. We send our best wishes to all individuals and communities that have been impacted by coronavirus."

MLB said it will announce effects on the schedule at an "appropriate time" and hopes to resume normal operations as soon as possible. MLB has been working with the other major North American sports leagues in response to the outbreak.

The NBA, MLB, NHL and MLS made a joint announcement Monday saying they were closing their lock rooms to media and all non-essential personnel.

MLS and the NHL also announced suspended seasons Thursday, after the NBA stopped its season Wednesday after at least two Utah Jazz players tested positive for the coronavirus.

MLS announced a 30-day league stoppage due to the coronavirus outbreak.

"Our clubs were united today in the decision to temporarily suspend our season -- based on the advice and guidance from the Centers for Disease Control and Prevention, Public Health Agency of Canada and other public health authorities, and in the best interest of our fans, players, officials and employees," MLS commissioner Don Garber said in a statement.

"We'd like to thank our fans for their continued support during this challenging time."

MLS said it is assessing the impact of COVID-19 with its medical task force and public health officials. The league will announce plans for the continuation of the season at a later date.

Two MLS matches scheduled for March 21 had been postponed in Seattle and San Jose, Calif., before the announcement. The next slate of games was scheduled for this weekend, starting with NYC FC against FC Dallas on Saturday at Yankee Stadium in New York City.

The NHL announced an indefinite stoppage Thursday, but hopes to resume play in time to complete the season and award the Stanley Cup.

The NHL has 189 games remaining, including 10 that were scheduled for Thursday. The regular season was scheduled to end April 4, with the Stanley Cup playoffs starting the week of April 6.

"The NHL has been attempting to follow the mandates of health experts and local authorities, while preparing for any possible developments without taking premature or unnecessary measures," the NHL said in a statement.

"However, following last night's news that an NBA player has tested positive for coronavirus -- and given that our leagues share so many facilities and locker rooms and it now seems likely that some member of the NHL community would test positive at some point -- it is no longer appropriate to try to continue to play games at this time."

NASCAR has not stopped its racing schedule, but announced Thursday that it will host races without fans for the foreseeable future.

"At this time, NASCAR will hold its race events at Atlanta Motor Speedway and Homestead-Miami Speedway without fans in attendance," officials said in a statement. "These events will be restricted to competitors, crews, officials and other necessary personnel to conduct the race.

"We will work with public health officials as we determine future scheduling beyond these events."

The ATP Tour and International Tennis Federation announced a six-week suspension in play for the men's professional tennis tour Thursday due to safety issues arising from the coronavirus outbreak. The suspension also includes all ATP Challenge Tour events and women's and men's events schedule up to and including the week of April 20.

"This is not a decision that was taken lightly and it represents a great loss for our tournaments, players, and fans worldwide," ATP chairman Andrea Gaudenzi said in a statement.

"However, we believe this is the responsible action needed at this time in order to protect the health and safety of our players, staff, the wider tennis community and general public health in the face of this global pandemic.

"The worldwide nature of our sport and the international travel required presents significant risks and challenges in today's circumstances, as do the increasingly restrictive directives issued by local authorities."