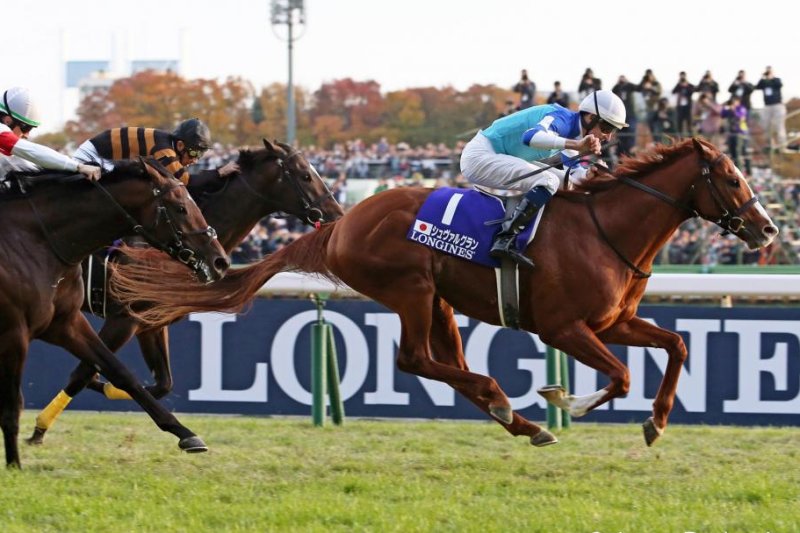 Muskoga Gold, shown winning the Cup and Saucer Stakes earlier this year, is the favorite in Saturday's Coronation Futurity at Woodbine and an early contender for the 2020 Queen's Plate. Photo by Michael Burns, courtesy of Woodbine

Nov. 22 (UPI) -- Weekend horse racing action stretches from Tokyo to Bahrain with a stop in England and a quick look at Hong Kong's preparations for its big weekend two weeks down the calendar.

The Grade 1 Japan Cup runs for the first time ever without a foreign entry but with some powerful local competitors. The Bahrain International Trophy, by contrast, features that country's first-ever international runners and some good ones at that.

Also on the weekend schedule in Tokyo is the first leg of the "Japan Road to the Kentucky Derby," the Cattleya Sho.

And speaking of Japan, California Chrome is the latest American stallion headed for Japan. See "News and Notes."

On the north American scene, Del Mar, Aqueduct and Woodbine contribute graded stakes while some promising 2-year-olds mix it up in Louisiana.

Let's take it from the top:

A wide-open field of 15 is set for Sunday's 39th running of the Japan Cup in Association with Longines -- the first-ever Japan Cup without a foreign entry. But whatever the race lacks in geographic diversity, it makes up in homegrown talent.

RELATED After Breeders' Cup win, Bricks and Mortar looks like Horse of the Year

Cheval Grand, a 7-year-old son of Heart's Cry, was second in the Group 1 Dubai Sheema Classic at Meydan on World Cup night, then finished sixth in the Group 1 King George VI and Queen Elizabeth Stakes at Ascot and eighth in the Group 1 Juddmonte International at York.

Rey de Oro, one of three in the race sired by King Kamehameha, finished second to Cheval Grand in the 2017 Japan Cup, then skipped last year's renewal, instead winning the Grade 1 Tenno Sho (Autumn). Wagnerian is one of four runners sired by Deep Impact, the 2006 Japan Cup winner and Japan's subsequent dominant sire. Wagnerian finished fourth and fifth in his two earlier starts this season and Makahiki has not won since September of 2016.

The Japan Racing Association attributes the first-ever lack of an international contender to, among other factors, "the increasing standard of racing in Japan ... gaining more recognition that Japanese horses are becoming increasingly hard to beat."

Curren Bouquetd'or, a 3-year-old daughter of Deep Impact who finished second in the Grade 1 Japanese Oaks, gets a weight swing while testing older male rivals for the first time.

Nearly half of the jockeys expected to ride in the Japan Cup are from outside Japan, including Ryan Moore, Oisin Murphy Christophe Soumillon, William Buick, and Frankie Dettori.

The "Japan Road to the Kentucky Derby" runs the first of its four laps Saturday with the Cattleya Sho at Tokyo Racecourse. The diverse field includes progeny of some well-known American sires -- two by American Pharoah with the likes of Uncle Mo, Eskendereya, Bernardini, Malibu Moon and Declaration of War also represented.

As with most of these 2-year-old events, the race is wide-open with several of the participants coming off their maiden wins. The winner of the 1,600-meters heat on the dirt course gains 10 points toward a bid to the 2020 Kentucky Derby Presented by Woodford Reserve. The points offering escalates in each of the subsequent three legs of the series, which culminates in the Fukuryu Stakes at Nakayama March 29, where the winner gets 20 points.

The 2108 Cattleya Sho was won by Make Happy, a Square Eddie filly campaigned by the Yoshida family whose career did not ignite thereafter. Master Fencer, who finished fourth in the series, accepted the invitation to the 2019 Derby and finished seventh, placed sixth. He went on to finish fifth in the Belmont Stakes and 15th in the Belmont Derby Invitational on the turf.

Friday's Bahrain International Trophy has drawn an exceptional group of foreign runners, topped by French-trained Group 1 winner Intellogent and six British-trained horses including Royal Ascot winner Afaak. The race is the first in Bahrain with international competitors and represents a major step forward for the Rashid Equestrian and Horseracing Club.

Intellogent, a 4-year-old Intello colt, took the Group 1 Qatar Prix Jean Prat during his 3-year-old season and more recently was second in the Group 3 La Coupe de Maisons-Laffitt. Afaak topped the other 27 runners in the Royal Hunt Cup at this year's Royal Ascot meeting.

"Attracting so many top owners, trainers, jockeys and horses for our first international race has exceeded our expectations and means a lot for Bahrain," said Sheik Salman bin Rashed Al Khalifa, executive director of the REHC. "But I am sure this is only the beginning of a successful journey to establish our country in the racing calendar."

Set Piece maintained his undefeated record on the all-weather Wednesday evening at Kempton Park, storming down the straight to win the British Stallion Studs EBF Hyde Stakes. The event was a Fast-Track Qualifier for the Bombardier All-Weather Championship Mile at Lingfield Park on next Good Friday, April 10.

Khalid Abdullah's homebred 3-year-old son of Dansili tarried well back in the field before launching a bid for jockey James Doyle. He caught pacesetting Khuzaam in the final strides to score by a short head with Accidental Agent, a previous Group 1 winner, reporting third. It was the first start since July for Set Piece, who was gelded and treated to throat surgery.

"Set Piece is a horse I have always adored, but it has not been plain sailing with him," said trainer Hugo Palmer. "We had to top and tail him during the summer to help him out and it seems to have made a real difference.

"There are a whole number of options open to him now and which route he takes will be down to Prince Khalid and his family," the trainer added.

More on this in the following weeks but, for now, the Longines Hong Kong International Races set for Dec. 8 at Sha Tin shape up as among the best. Almond Eye is set to context the Cup at 2,000 meters in her second run outside Japan. And she brings a powerful bunch with her. Australia is represented and so is Europe. For the first time, a Derby winner is scheduled to compete in this dramatic climax to the racing year.

Sadler's Joy heads a full field for Saturday's $200,000 Grade III Red Smith Stakes at 1 3/8 miles on the turf. The 6-year-old son of Kitten's Joy, out of the Dynaformer mare Dynaire, hasn't won since March of 2018 but has regularly hit the board in Grade I company throughout the intervening months. He finished second in the Grade I Sword Dancer at Saratoga in August and third in the Grade I Joe Hirsch Turf Classic at Belmont Park last month -- enough to make him the solid, 8-5 pick on the morning line.

Competition in the Red Smith includes Tiz A Slam, winner of three of his last four starts and, according to trainer Roger Attfield, just hitting his stride at age 5. The son of Tiznow is in from Woodbine. Red Knight, Glorious Empire and Petit Fils, making his first U.S. start after racing in France, also figure.

Fields don't get much more competitive than the sextet assembled for Saturday's $100,000 Grade III Native Diver Stakes at 9 furlongs on the main track. The morning-line favorite, at 5-2, is Bob Baffert's Santa Anita Derby winner Roadster, who finished 15th in the Kentucky Derby and come off a pair of runner-up showings at Santa Anita.

Right behind that one on the oddsmaker's chalkboard are Two Thirty Five, Leading Score and Midcourt. All are consistent performers and frequent opponents on the Southern California circuit. Midcourt, a Midnight Lute gelding, was last seen winning the Comma to the Top Stakes Oct. 27 at Santa Anita with Two Thirty Five second and Leading Score third.

Muskoga Gold, an early favorite for the 2020 Queen's Plate, tops a field of eight for Saturday's $225,000 (Canadian) Coronation Futurity at 1 1/8 miles on the all-weather track. The Lea colt, trained by Mark Case for Conrad Farms, won the Cup and Saucer Stakes Oct. 6, then was second in the Grade III Grey Stakes against open company in his last outing.

"He looks like a Queen's Plate horse," Casse said. "The Conrads have been so good to us, it would be nice to reward them with something like that. They told me last year that they would like to try and find a Queen's Plate horse. So we went out and bought a few and he's one of them."

Prominent among the others in the Coronation Futurity is Pleasecallmeback, a Hard Spun gelding who finished second in the Cup and Saucer.

On the same Saturday program, Pink Lloyd, Canada's 2017 Horse of the Year, is the even-money favorite on the morning line for the $175,000 (Canadian) Grade II Kennedy Road. In his last start, the Grade III Bold Venture Stakes, the 7-year-old son of Old Forester finished fourth but was ruled a non-starter after an inquiry.

A dozen fillies and mares are set for Sunday's $175,000 (Canadian) Bessarabian Stakes at 7 furlongs on the all-weather. Xenobia, a Group 3 winner in Ireland last season, comes to Woodbine off a victory in the Grade III Athenia Stakes at Belmont Park Oct. 20. Amalfi Coast and Gamble's Candy both look for a third straight win. Special Relativity has been competitive against tougher company at Saratoga and over the Woodbine course.

Eight are set to face the starter in Saturday evening's $100,000 Jean Lafitte Stakes for 2-year-olds with no obvious favorite among them. Sir Winsalot, an Algorithms colt trained by Kenny McPeek, is the narrow pick on the morning line after an impressive, 5 3/4-lengths victory in a Keeneland allowance event in his last start -- an off-the-turf affair run on a sloppy track.

Also rating a look in the Lafitte: Something Super, second in the Clever Trevor Stakes at Remington Park last time out; X Clown, boasting two wins and two seconds from four starts on the Louisiana circuit; and Jack the Umpire, a winner at both Delaware Park and Delta.

California Chrome has been sold to his ownership syndicate to the JS Company of Japan and will stand at the Arrow Stud on Hokkaido. He follows ace American turf runner Bricks and Mortar -- likely the 2019 U.S. Horse of the Year -- to stud duty in Japan. Wailing and gnashing of teeth will ensue among casual American racing fans but, as the Boston Red Sox said when they traded Babe Ruth to the Yankees, "Hey, it's a business."

"I'm hoping he's the next Sunday Silence," said Duncan Taylor of Taylor Made Stallions, where California Chrome stood during his North American duties.