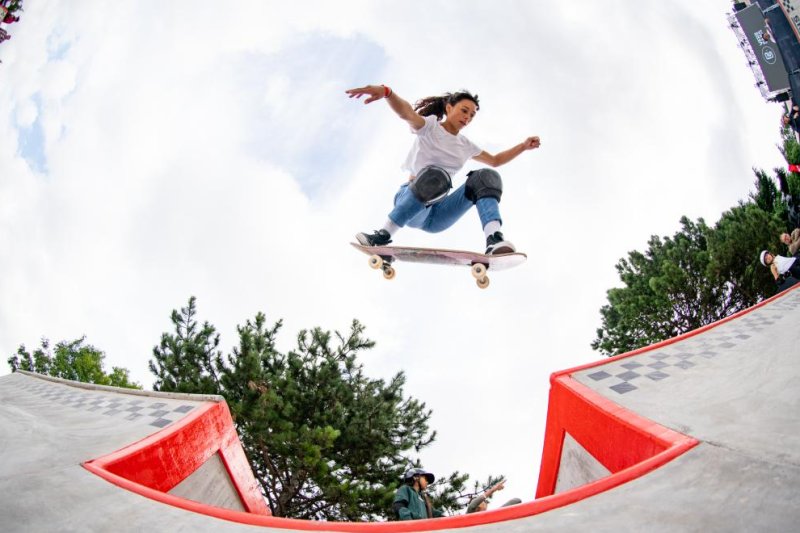 Lizzie Armanto is one of the top women's skateboarders in the world. She also is a dual citizen of the United States and Finland and will compete for Finland during the 2020 Summer Games in Tokyo. Photo courtesy of the Vans Park Series

Oct. 21 (UPI) -- Skateboarding icon Tony Hawk says the Olympics needs the sport's "cool factor" more than the sport needs the Summer Games' validation. But the Olympics will be the pinnacle of the sport for other athletes debuting their specialties in Tokyo 2020.

"I was surprised," Lizzie Armanto, one of the top women's skateboarders in the world, said about the move to add the sport to the Olympics. "There was talk about it being included. And then once it was official, everyone seemed to wonder, now what?

"From the people in charge, to the skaters, to the brands, everyone seems like they're still trying to figure it out," said Armanto of Santa Monica, Calif.

The 2020 Summer Games will begin July 24 in Tokyo, with skateboarding focused on park and street events. Other extreme sports -- sport climbing, surfing and karate -- also will debut in Japan.

RELATED Warriors' Stephen Curry to play in 2020 Olympics: 'That is the plan'

Armanto, 26, a dual-citizen of the United States and Finland, will compete for Finland at the Olympics. She became the first woman to complete Hawk's 360-degree vertical loop, a gravity-defying ramp named after skateboarder Hawk.

"It's natural to be hesitant about taking a new step," Armanto said. "Skateboarders are precious about their culture. For skateboarding to be included, I think it's going to make more opportunities for skaters.

"Skateboarding is my passion and has changed my perspective on how I look at the world. It's cool to be able to share that."

RELATED U.S. women set for May trial vs. U.S. Soccer

Hawk says it's "about time" the sport has been added to the Summer Games, but is concerned that including it could inspire athletes to skate for only fame or fortune.

"Skateboarding has come far enough that I feel like the Olympics needs skateboarding's cool factor more than we need their validation," Hawk said at the Project Play Summit.

Armanto chose to skate for Finland to open up spots for more top athletes to compete since no country can send more than three athletes to Tokyo per event per gender.

By choosing for Finland, Armanto opens an opportunity for another woman to compete for the United States. Close to half of the world's top 20 skateboarders will not be at the Summer Games because of team size limitations.

Some skateboarders don't see the Olympics majorly impacting their sport.

Caples, 23, said he isn't sure if skateboarding's inclusion in the Olympics will make the sport "that much bigger." He compared the possible impact to snowboarding, which was introduced to the Olympics in 1998. Caples also said he thinks the Olympics will help the sport be seen by a different audience.

He thinks the sports inclusion could make contest skateboarding harder, with athletes training strictly for contests and working on harder tricks.

The Vans Park Series World Championships -- the top park terrain skateboarding event -- is being used as a blueprint by the International Olympic Committee for Tokyo 2020.

Vans -- the organizing body of competitive skateboarding -- created the format for competitive park terrain skating and will continue to run the league and support all of its athletes at the 2020 Olympics. It will continue to produce its competition series independently of the Summer Games.

Gascon said skateboarding and the Olympics aren't an "easy marriage" and there is a "divide in skateboard culture."

"Everyone's super curious about how people are going to show up [at the Olympics], what they're going to be wearing," Caples said. "There's still a lot that's unclear. In my eyes, it's just going to be another contest."

NFL // 8 hours ago
Longtime Cowboys TE Jason Witten open to playing elsewhere in 2020
Feb. 19 (UPI) -- Veteran tight end Jason Witten wants to play again in 2020, even if it isn't for the Dallas Cowboys.

Soccer // 9 hours ago
Champions League soccer: Atletico upsets Liverpool
Feb. 19 (UPI) -- La Liga club Atletico Madrid scored a fourth-minute goal and held on to upset Premier League leaders Liverpool in the first leg of a round of 16 matchup at the 2019-20 Champions League.