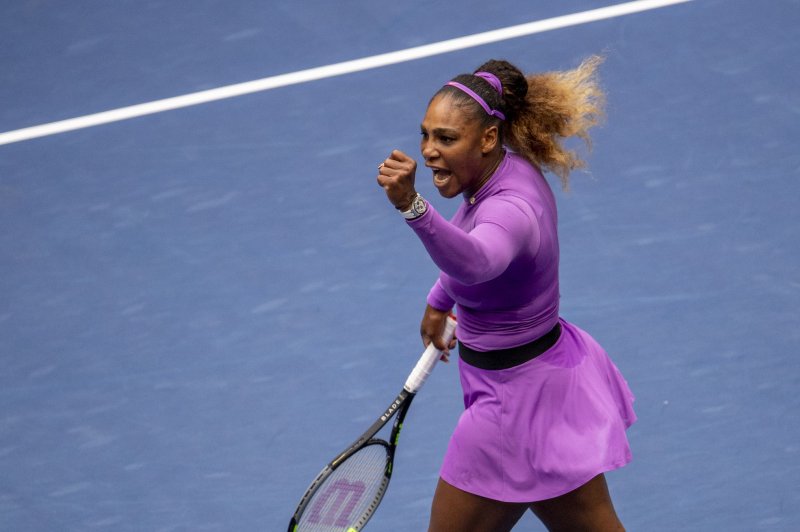 Bianca Andreescu of Canada returns a ball to Serena Williams in the Women's Final in Arthur Ashe Stadium at the 2019 US Open Tennis Championships at the USTA Billie Jean King National Tennis Center on Saturday in New York City. Photo by John Angelillo/UPI | License Photo

Bianca Andreescu, of Canada, kisses the court after beating Serena Williams of the United States to win the Woman's Championship at the 2019 US Open Tennis Championships at the USTA Billie Jean King National Tennis Center on Saturday in New York City. Photo by Ray Stubblebine/UPI | License Photo

"It's so hard to explain in words, but I'm just beyond grateful and truly blessed. I've worked really hard for this moment," Andreescu said in her post-match interview. "I can't complain. This year has been a dream come true."

Williams rallied to get back into the match in the second set, after falling 6-3 in the first set. Andreescu held a 5-1 lead in the second set before Williams tied it at 5-5. Williams broke Andreescu's serve when she was going for championship point to spark the rally.

"I was just fighting at that point, just trying to stay out there a little bit longer," Williams said. "The fans started cheering so hard, it made me play a little bit better and fight a little bit more."

Andreescu captured her first career Grand Slam with the victory over Williams. She broke Williams' serve to win the 1:39 match at Arthur Ashe Stadium. Andreescu lost in the first round of qualifying in her previous two U.S. Open appearances.

"I just feel really honored to be out here," said Williams, who had been cheered on by Meagan Markle, the Duchess of Sussex. "I'm just so proud I'm still out here and competing at this level."