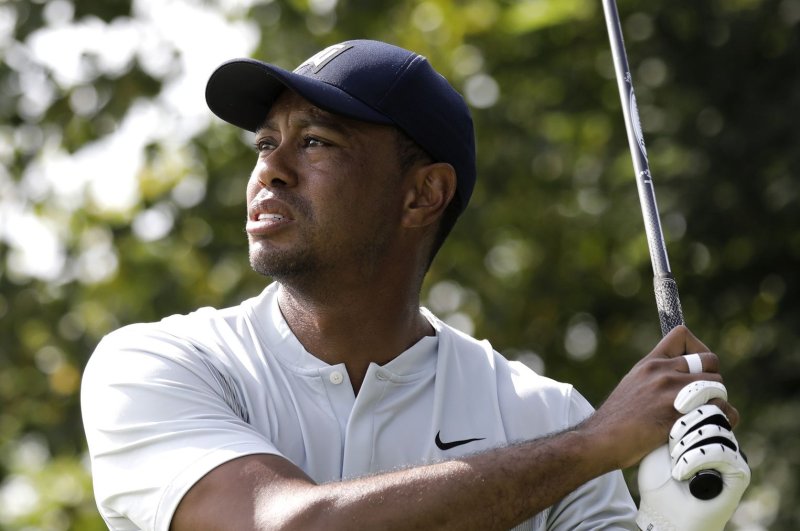 Tiger Woods hits his driver on the 17th hole in the first round of The Northern Trust golf championship FedEx Cup playoffs on Thursday at Liberty National Golf Club in Jersey City, New Jersey. Woods withdrew from the event Friday due to a mild oblique strain. Photo by Peter Foley/UPI | License Photo

Aug. 9 (UPI) -- Tiger Woods withdrew from the Northern Trust on Friday, citing a mild oblique strain before the start of the second round.

Woods was unlikely to make the cut at Liberty National after he shot 75 in the first round. It marked the first time he has withdrawn in the middle of a tournament since the Dubai Desert Classic in February 2017, two months before he underwent spinal fusion surgery.

"Due to a mild oblique strain that led to pain and stiffness, I have to withdraw from the Northern Trust," Woods said in a statement. "I went for treatment early Friday morning, but unfortunately I'm still unable to compete.

"I'd like to thank the New Jersey and New York fans for their support and remain hopeful I can compete next week at the BMW Championship."

Woods withdrew three days before the beginning of the Arnold Palmer Invitational in March due to a neck strain. According to ESPN, he has cited back stiffness multiple times this summer. He arrived at the course Friday morning and received treatment from the tour's fitness staff, but decided he was unable to compete and left.

Dustin Johnson was 4-under par Friday to grab first place in the tournament. He shot 63 on Thursday and was one stroke behind former leader Troy Merritt after the first round.

RELATED Tiger Woods limited at Liberty National with back stiffness

Merritt, who tied the course record with a 9-under 62 on Thursday, was 1-under par in the second round and slid into a share of third place.

Jordan Spieth was red-hot Friday, finding 15 greens in regulation and sinking eight birdies against one bogey. He shot 67 in the first round and sits one stroke behind Johnson for the lead.

Abraham Ancer, Patrick Reed and Jon Rahm are tied with Merritt for third at 10-under par. Rory McIlroy and Justin Rose each shot 68 in the second round and sit at 9-under par.