Frankie Dettori boots home Too Darn Hot in this week's Qatar Sussex Stakes, his second Group 1 win of the three-day meeting and 11th in a span of just 62 days. Photo courtesy of Goodwood Racecourse

Aug. 2 (UPI) -- The midsummer meeting formerly known as "Glorious Goodwood" turned into a playground for streaking jockey Frankie Dettori, who won two of the three Group 1 races and just missed in the third.

The two victories during the three-day festival gave Dettori 11 Group 1 victories in a 62-day span -- an unheard-of pace at the top level of the sport.

Along the way, Goodwood produced leading candidates for the likes of the Melbourne Cup and the Breeders' Cup and provided some incentive for Japan's world-traveling horses.

But, as was Royal Ascot a month and a half earlier, it was largely Dettori's week.

Stradivarius, under Dettori, landed his third Qatar Goodwood Cup Tuesday on the first day of the meeting, moving within one victory of claiming his second straight 1 million-pound Weatherbys Hamilton Stayers Bonus. The string continued as Too Darn Hot got back into winning form in Wednesday's Qatar Sussex Stakes. And only an inspired run by Japanese mare Deirdre in Thursday's Qatar Nassau Stakes for fillies and mares prevented a Dettori sweep.

The tour de force was not without a small touch of controversy as the powerful team of Dettori and trainer John Gosden exchanged relatively polite barbs about the latter's premature celebration in Stradivarius' victory, which allowed rival Dee Ex Bee to get within a neck at the line.

"Stradivarius has won his race," Gosden said, "and then our great hero started waving to the crowd. I must say that is a little dangerous because Stradivarius is a pro and when you say, 'Well that's enough', he says, 'Okay, I'll put the brakes on,' and it was lucky Frankie didn't go over the handlebars, I thought!"

Dettori, who won the Grade I King George aboard Enable for Gosden on Saturday, could afford to pooh-pooh the mini tempest.

"He passed the others very easily, but when he got to the front and had the race won I probably celebrated a stride too early," said the 48-year-old rider, who has landed 10 Group 1 wins since May. "Everyone is panicking but I've been here before and know where the winning post is."

Adding a nice olive branch, Dettori referred to Gosden as "a great trainer ... who puts it all on a plate for me. He and the staff should have all the credit."

Cross Counter, who led the Goodwood Cup briefly before surrendering to the top two and finishing third, is headed for another go at the Melbourne Cup, which he won last year for Godolphin and trainer Charlie Appleby.

"You won't see these class of stayers all over the world, so for Cross Counter to be mixing it with Stradivarius and Dee Ex Bee shows that he still holds his ability and his enthusiasm, Appleby said. "He has strengthened this year. He was a well-handicapped horse when winning last year's Melbourne Cup."

As for Dee Ex Bee, trainer Mark Johnston said the Prix du Cadran and the Doncaster Cup "are probably the next ones for him. That is not shirking Stradivarius, but the chances are he won't meet Stradivarius in those."

In fact, Stradivarius, a 5-year-old son of Sea the Stars, owned and bred by Bjorn Nielsen, is headed for the Grade 2 Lonsdale Cup at the Ebor Meeting in York where a victory would pad Nielsen's pocket with another Weatherbys check.

Also on Tuesday at Goodwood, Sir Dancelot upset favorite Hey Garman in the Group 2 Qatar Lennox Stakes and Pinatubo dashed off to a 5-lengths victory in the Group 2 Qatar Vintage Stakes for 2-year-olds, serving notice for the rest of the season and next year's Classics. Both of those were at 7 furlongs.

Pinatubo, another owned by Godolphin and trained by Appleby, is a son of 2004 Vintage Stakes winner Shamardal. He went into the race among the favorites for the 2020 Qipco 2000 Guineas and did nothing to hurt his cause.

"We'll take one step at a time," Appleby said. "But after retiring Blue Point I've been looking for another good one, and may have found him.

The Dettori-Gosden show continued on Wednesday as Too Darn Hot rallied by a stubborn Circus Maximus in the final furlong to win the Group 1 Qatar Sussex Stakes by 1/2 length. Dettori this time saved the celebration for the winner's enclosure.

Too Darn Hot, a 3-year-old Dubwai colt racing in the pink colors of Lord Andrew Lloyd-Webber, saved ground while staying in touch with the early speed. With 2 furlongs left, Ryan Moore went all-in with Circus Maximus, seizing the lead with a full head of steam. Dettori found a convenient seam between rivals, took up the chase and was in contention with a furlong left, confidently riding Too Darn Hot to the finish. I Can Fly gave the Coolmore-O'Brien connections second and third with a late run.

Too Darn Hot was a hot prospect, indeed, for this year's Classics after an undefeated 2-year-old campaign that culminated in victory in the Group 1 Dubai Dewhurst. But his 3-year-old start was delayed until May and he reported second in both starts that month, then third in the St James's Palace at Royal Ascot. The ship was righted with a win in the Group 1 Qatar Jean Prat at Deauville July 7 and the colt was the even-money favorite for Wednesday's race.

Gosden blamed himself for Too Darn Hot's early-season woes. "If we had just been sensible about it, we probably would not have got ourselves in a mess. But, fortunately, he was a very high-class champion 2-year-old and he has got both the trainer and the manager out of trouble," the trainer said.

Gosden said it's likely the colt's commercial value at stud will see him retired after the 2019 season. In the meantime, he will see "lovely races" like the Jacques le Marois and the Queen Elizabeth II. And, he added, "I would not be frightened of running him in the Breeders' Cup Mile at Santa Anita, which is around two turns and will be run on fast ground. Seven-furlong horses are suited by that mile there."

In Wednesday's 2-year-old feature, Liberty Beach got a cleaner trip than Alligator Alley in the Group 3 Markel Insurance Molecomb Stakes and rode that advantage to a 1-length victory. With Jason Heart up for trainer John Quinn, the Cable Bay filly recorded her fourth win from five starts. Her only defeat was a fourth-place finish in the Group 2 Queen Mary at Royal Ascot.

Quinn said he is eyeing the Prix Morny for Liberty Beach, adding, "I think we will also target the Prix de l'Abbaye and then the Breeders' Cup. She has a lot of tactical speed and America could suit her. That is my plan. I have been training for a long time and if she is well in herself, you just need to keep kicking with these fillies and don't worry too much about next year right now."

In the meeting's final Group 1, the Qatar Nassau Stakes for fillies and mares, Dettori took Mehdaayih right out to the lead and the 3-year-old daughter of Frankel looked for most of the 1 1/4 miles like the best of the lot. But then Oisin Murphy got to work on Japan's runner, Deirdre, who found room along the rail and rallied by to win by 1 1/4 lengths at long odds. Mehdaayih held second with Rawdaa third and dual Guineas winner Hermosa fading from the pace to finish last of nine.

Deirdre, a 5-year-old daughter of Harbinger, had been more promise than performance at the top level throughout her career and most recently was sixth in the Group Prince of Wales's Stakes at Royal Ascot. Before that, she reported sixth in the 1 FWD QE II Cup at Sha Tin in Hong Kong and fourth in the Group 1 Dubai Turf at Meydan on World Cup night, a race won by Almond Eye.

Hashida Yoshimura, racing manager for owner Toji Morita and daughter of trainer Mitsuru Hashida, said the victory is important for Japan as Deirdre became only the second Japanese-trained horse to win a Group 1 in the UK, 19 years after Agnes World landed the July Cup. Seiko

"We have not yet decided if Deirdre will return to Japan or whether she will stay over here, Yoshimura said. We will make that decision in the coming days when we sit down and have a chat about what we should do next. She could possibly stay in Europe. 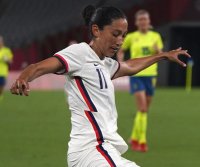