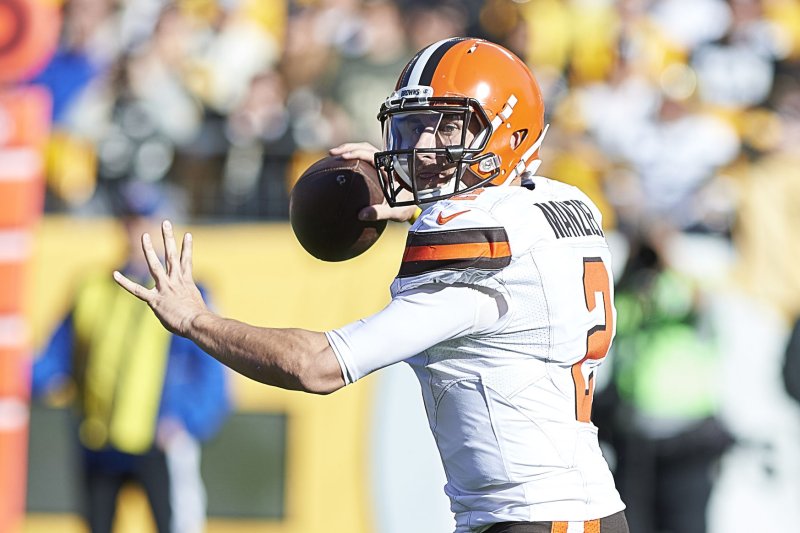 Johnny Manziel has played in various side leagues since his last NFL game with the Cleveland Browns in 2015. File Photo by Shelley Lipton/UPI | License Photo

"I enjoyed him from an offensive standpoint, from a personal standpoint," Manziel told reporters Saturday. "He's been there for me, especially when I was in Hamilton, getting to a new place, a different country."

The Canadian Football League terminated Manziel's contract with the Alouettes after eight games, saying Manziel violated an undisclosed agreement that was a condition of him being eligible to play in the league.

Manziel last played for the Alliance of American Football's Memphis Express earlier this year. That league folded in April.

Manziel also said he'd consider playing for the league's Dallas franchise. The XFL has not announced any of league's eight team names.

Manziel cited Houston's proximity to Texas A&M. Manziel won the Heisman Trophy for the Aggies in 2012.

"A lot of Aggies drove from Houston to College Station," Manziel said. "Houston's a great city that'll always be near and dear to me."

Manziel could face eligibility issues with the XFL, which has a policy excluding players with a criminal record from joining the league. Manziel faced a domestic violence charge after he was accused of hitting his ex-girlfriend in January 2016. The charges were dismissed in November 2017.

RELATED XFL to air on weekends on ESPN, ABC, Fox

The XFL is slated to begin play in February.