May 29 (UPI) -- The St. Louis Blues defeated the Boston Bruins 3-2 in overtime Wednesday night in Game 2 of the Stanley Cup Final at TD Garden in Boston.

Blues defenseman Carl Gunnarsson scored the game-winning goal on a delayed penalty 3:51 into the extra period as St. Louis tied the series at one game apiece and earned its first Stanley Cup Final victory in franchise history.

The Blues had lost their previous 13 games in the championship series, including Game 1 against the Bruins on Monday night. It was the first overtime game in a Stanley Cup Final since Game 2 in 2016.

"First game we weren't happy," Gunnarsson told reporters. "Tonight, we came out flying. I think we played a great game for 60 minutes. That's just the team we are."

The Bruins and Blues exchanged goals in the opening period before a defensive battle took place in the next two frames. St. Louis forward Vladimir Tarasenko and defenseman Robert Bortuzzo each scored in the first period.

Boston forward Charlie Coyle opened the scoring with a power-play goal in the opening five minutes of the contest. Joakim Nordstrom recorded his third score of the postseason midway through the first to give the Bruins a temporary 2-1 lead.

NFL // 4 hours ago
Cowboys OL Ty Nsekhe ruled out Sunday due to heat-related illness
Sept. 17 (UPI) -- The Dallas Cowboys will be without tackle Ty Nsekhe, who was hospitalized due to a heat-related illness, when they play the Los Angeles Chargers on Sunday, coach Mike McCarthy told reporters Friday. 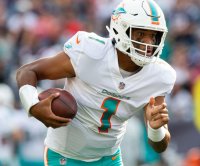