May 15 (UPI) -- Boston Bruins goalie Tuukka Rask backstopped his team to a 2-1 win in Game 3 over the Carolina Hurricanes.

Rask stopped 35 of the 36 shots he faced for the Bruins, who have won six consecutive playoff games for the first time since 1978. The Bruins grabbed a 3-0 series lead Tuesday night, and are one victory away from reaching the Stanley Cup final.

"Guys have played with Tuukka for awhile. They know what he's made of," Bruins head coach Bruce Cassidy told reporters. "Probably right now is the best I've seen him play."

Rask recorded 20 saves in the first period alone, becoming the first Bruins goaltender since Tim Thomas in 2011 to record that many in a single period during the NHL playoffs.

The Bruins goalie also held the Hurricanes' power-play unit to a scoreless night on five chances, including four opportunities in the first period.

Rask has an 11-5 record with a 1.96 goals-against average and .939 save percentage in the playoffs. He has allowed only 32 total goals in 16 games this postseason.

The Bruins will go for the series sweep in Game 4 on Thursday night at PNC Arena.

MLB // 11 hours ago
Reds' Joey Votto pushes homer total to 35 with two blasts vs. Pirates
Sept. 28 (UPI) -- Joey Votto inched closer to his career high for home runs in a season with two blasts in a Cincinnati Reds blowout of the Pittsburgh Pirates.

NFL // 21 hours ago
49ers CB Josh Norman released from hospital after suffering lung injury
Sept. 27 (UPI) -- San Francisco 49ers cornerback Josh Norman has returned to the team after being hospitalized due to a bruised lung that he suffered during Sunday night's game against the Green Bay Packers.

NBA // 22 hours ago
Pelicans' Zion Williamson to be ready for regular season after foot surgery
Sept. 27 (UPI) -- New Orleans Pelicans star forward Zion Williamson sustained a broken right foot during the off-season but should be able to return in time for the start of the regular season. 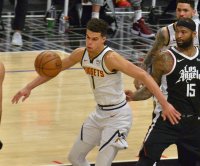