Tiger Woods touches the hand of a patron as he walks to the 8th tee box in the second round at the 2019 Masters Tournament on Friday at Augusta National Golf Club in Augusta, Georgia. Photo by John Angelillo/UPI | License Photo

April 12 (UPI) -- Tiger Woods avoided a serious injury after an accident involving a security guard Friday during the second round of the Masters tournament at Augusta National Golf Club.

A member of the tournament's security staff accidently slid into the golfer's ankle while trying to protect him from the gallery after hitting his second shot on the 14th hole.

Woods had hit his ball left of the fairway and played a superb shot through the trees to reach the 14th green. While watching the flight of the ball, onlookers began to move toward Woods. The security guard, in an attempt to prevent spectators from getting too close, slipped on the wet grass and made contact with the golfer's right ankle.

After his approach shot on the 14th hole, a security guard makes contact with Tiger Woods. pic.twitter.com/0DNpWn1AkI

Woods, who has had numerous injuries in recent years, gingerly limped away after the freak accident. He continued to flex the ankle as he reached the green for his next shot.

Woods shook off the ailment and made the 15-foot putt for birdie. He carded a 4-under 68 to finish six under after Friday's round. He sits one shot behind five leaders for first place.

Soccer // 39 minutes ago
Soccer: Champions League final could move from Istanbul due to COVID-19
May 7 (UPI) -- The English Football Association and UEFA are in talks about a potential venue change for the 2020-21 Champions League final after host country Turkey landed on the United Kingdom's COVID-19 travel red list.

Sports News // 4 hours ago
Kentucky Derby winner returns to the track as Preakness field shapes up
May 7 (UPI) -- While the second leg of the Triple Crown -- including Kentucky Derby winner Medina Spirit -- continues to take shape in Baltimore, horse racing attention shifts this weekend to Belmont Park. 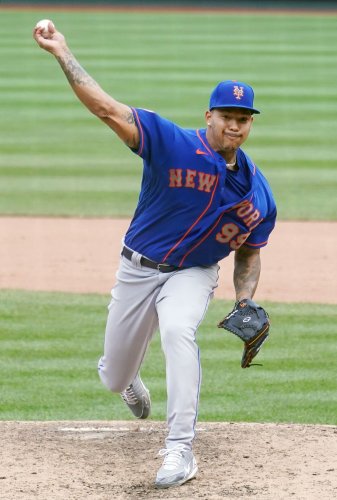 MLB // 7 hours ago
Miguel Rojas, Adam Duvall homers help Marlins beat Diamondbacks
MIAMI, May 7 (UPI) -- Miguel Rojas and Adam Duvall each homered to lead the Miami Marlins to a narrow victory over the Arizona Diamondbacks in a game that featured just 10 hits.