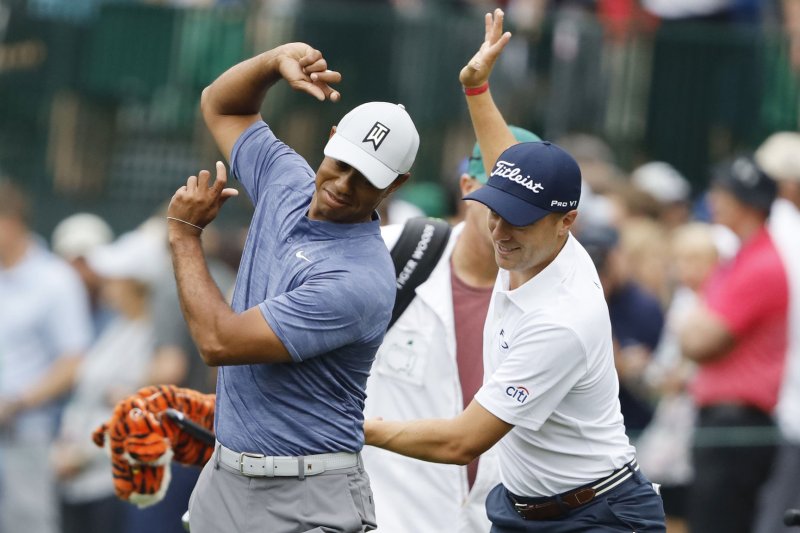 Tiger Woods (L) has +1400 odds at winning the 2019 Masters, while Justin Thomas sits at +1800, according to Bovada. Woods and Thomas tee off with the field Thursday at Augusta National Golf Club in Augusta, Ga. Photo by John Angelillo/UPI | License Photo

Rory McIlroy is the favorite (+700 odds) to win his first Masters title at the 2019 tournament, according to Bovada. Photo by John Angelillo/UPI | License Photo

April 9 (UPI) -- Rory McIlroy is the favorite to win the 2019 Masters. UPI has you covered with more best bets to win the tournament and some fun facts from Augusta National.

The tournament tees off Thursday with the first round. Golfers flock to the fairways Wednesday for the annual Par 3 event.

Patrick Reed returns to the course as the defending champion. Sergio Garcia, Danny Willett, Jordan Spieth, Bubba Watson, Adam Scott and many other Green Jacket holders will also tee off.

But McIlroy, who has never won the tournament, opens with +700 odds to capture his first Green Jacket, according to Bovada. Dustin Johnson, who also has yet to win at Augusta, has the second-best odds at +1000. Read below for most Masters odds.

RELATED Masters 2019: How to watch the Par 3 Contest
Fun Facts

Did you know Bill Gates and Warren Buffet are the two richest members of Augusta National Golf Club? The billionaires have a combined net worth of $182.9 billion, according to WalletHub. Diana Murphy, Condoleezza Rice, Darla Moore and Ginni Rometty are four of the female members at the club, which includes 300 total members. Augusta National's reported initiation fee is $30,000, with $2,000 in annual dues. Dwight Eisenhower is the only U.S. president to have been a member at the club.

It has been more than 5,100 days since Tiger Woods won at the Masters. Nearly 4,000 days have passed since Woods' last major victory. He watched his annual endorsement income dip $27 million from 2010 to 2017, according to WalletHub. Woods' net worth increased $309 million from 2010 to 2018. Woods is 29 years old, while the average age of the world's top-10 golfers is 29. Only six golfers have won the Masters at 40 years old or older, including Jack Nicklaus in 1986.

While the tickets might be pricey, the concession prices are clutch. Beer is the most expensive item on the menu at $5 for an import or craft selection. You can get an egg salad or pimento cheese sandwich for just $1.50.

While the gallery feasts on favorably priced food, the defender Masters champion is tasked with picking the menu for a Masters week winner's gala. Sergio Garcia had an international salad, a lobster rice and his wife's tres leches cake. Jordan Spieth served a salad to kick off his meal in 2016. Spieth also had Texas barbecue and warm chocolate chip cookies.

Those golfers are fighting for a total purse of $11 million at the 2019 Masters. The winner takes home $1.98 million, while the runner-up gets $1.19 million. The winning caddie gets a 10 percent cut of the winner's share.

The golf industry has a $2.4 billion estimated impact on Georgia's economy, according to WalletHub. An estimated 57,000 jobs in Georgia are supported by the sport. About 90 percent of the world's golf carts at made in the state. There is more than $120 million in impact on the Augusta-area economy, due to the Masters.