Emotional end for Duke after loss in NCAA tourney 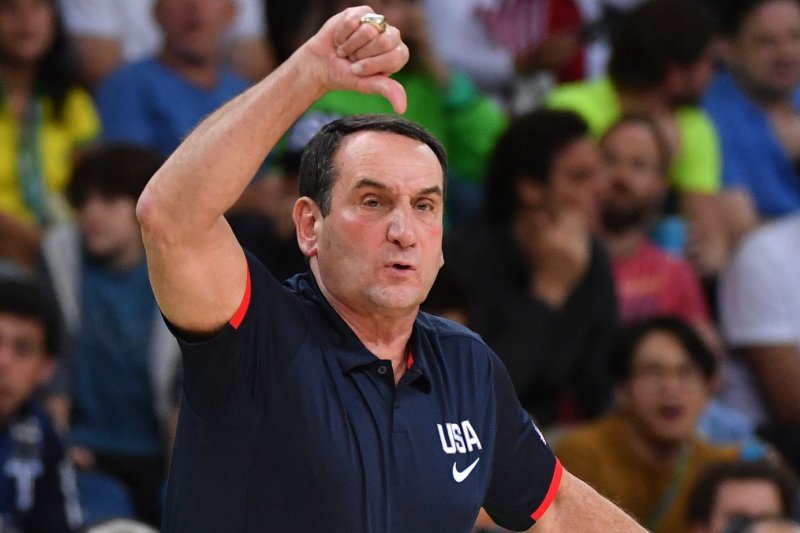 Duke Blue Devils coach Mike Krzyzewski and the team had some raw emotions after their Elite eight loss to Michigan State on Sunday. File Photo by Kevin Dietsch/UPI | License Photo

April 1 (UPI) -- It was not the outcome that the Duke Blue Devils wanted, and emotions ran high for the team after their loss Sunday in the NCAA tournament's Elite 8 round.

The Blue Devils were knocked out of the tourney again before reaching the final four, a round they have missed  since they won their last national title in 2015.

"They're deserving of special things, and they have had a special year," coach Mike Krzyzewski stated via ESPN.

"But not going to the Final Four is obviously a huge disappointment for us."

The Blue Devils had high hopes of getting not only to the final four and then to the title game. But yet again, it was a stunning end to a that had brought high hopes.

Blue Devils guard Tre Jones was one player who had a tough time holding back the emotions, sobbing on the court following the 68-67 loss to Michigan State.

"If you weren't a Duke fan, everyone wanted to see us fail," Jones told ESPN after the loss.

"All the adversity, it made us so close as a group. We all wanted to win so bad, and that's what hurts so much."

The loss for the overall first-seed also likely marks the end of the career of Duke star player Zion Williamson, who is expected to declare for the NBA draft.

Williamson seemed to have his own struggles gripping the fact this was the last time he would wear a Duke uniform.

"Just look around the locker room and see your teammates, your brothers," Williamson said. "And you just think this group probably never will play together."

The 32-6 Blue Devils were pushed to the brink earlier in the tournament twice, but were able to overcome and survive. Sunday they were not as fortunate.

"It's been a remarkable year for these young men," Krzyzewski said at the end of his press conference to WRAL.com. "I'm not sure another group will have it; a year with all this."