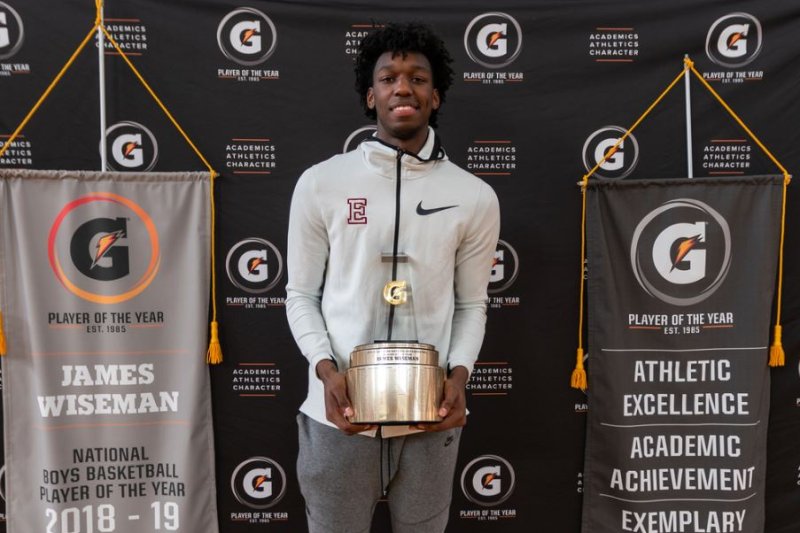 March 21 (UPI) -- No. 1 high school basketball recruit James Wiseman is headed to Memphis next season. He says his mission is to lead the Tigers back to the NCAA tournament.

Memphis (22-13) isn't sitting at home, as they play in the NIT tournament, but the Tigers are missing out on the "big dance" for the fourth consecutive season.

He chose to stay in Memphis and join a Tigers program taken over by coach and former NBA star Penny Hardaway, who previously coached at East.

Wiseman -- who won the Gatorade National Boys Basketball Player of the Year award Tuesday -- also has made it his mission to recruit other star prep-level hoopers to join him at Memphis.

"My mission is to make it to NCAA tournament next year," Wiseman told UPI. "I've been recruiting some of the top players in the country to come play with me and make it happen. That's my mission so far."

The Tigers haven't advanced to the Elite Eight since 2009. Memphis had its deepest run in 2008, when the Tigers lost in the national championship.

Memphis Grizzlies power forward Jaren Jackson Jr. presented Wiseman with his most recent player of the year accolade. He said an easy comparison for Wiseman would be former NBA star Chris Bosh, who could dominate inside but also had a soft shooting stroke with decent range.

"They'll be in [the tournament] next year," Jackson said.

Jackson also said Wiseman can be as dominant as he wants to be. The Grizzlies star put him in the class of Duke phenom Zion Williamson, among others.

"I think he can be as dominant as he wants," Jackson said. "I put him in the class of great college players. You look at Zion [Williamson] and what he is doing this year as a freshman, what Anthony Davis did in leading his team to a championship. What other freshman did down the line. I think he can go right along with them, and more."

Wiseman said he thinks Williamson and the Blue Devils will win this year's tournament. He keeps in touch with Duke star R.J. Barrett and will be cheering on the dominant duo this March. Barrett also was the top recruit in his class and won the Gatorade National Boys Basketball Player of the Year to cap off his prep career.

"I can't wait to get there [Memphis]," Wiseman said. "I'm just going to work hard every day and try to learn as much as possible."