March 21 (UPI) -- LSU freshman forward Naz Reid made his presence known early during the Tigers' first round matchup against Yale on Thursday in Jacksonville.

The projected first-round pick in the 2019 NBA Draft pick showed off his athleticism with a vicious throw down midway through the first half at VyStar Veterans Memorial Arena. Yale had the ball at the start of the sequence before senior guard Trey Phills turned it over.

Phills had a pass picked off by Tigers guard Tremont Waters. Waters broke down the right flank in transition and threw a pass between three Bulldogs defenders, finding Reid near the 3-point line.

Reid took one step after receiving the shovel pass. He then elevated toward the rim and put the ball high in his right hand before throwing down the nasty one-handed finish. Reid's dunk gave the Tigers a 25-19 advantage.

The LSU star had five points and five rebounds at halftime. LSU led Yale 45-29 at the break. Waters had 13 points and six assists at halftime for the Tigers. 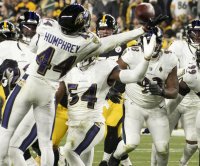 NFL // 20 hours ago
Vikings' Thielen, Ravens' Humphrey, Raiders' Drake among injured in NFL's Week 13
Dec. 6 (UPI) -- Adam Thielen of the Minnesota Vikings, Marlon Humphrey of the Baltimore Ravens and Kenyan Drake of the Las Vegas Raiders are among the top players who sustained significant injuries in Week 13 of the 2021 NFL season.