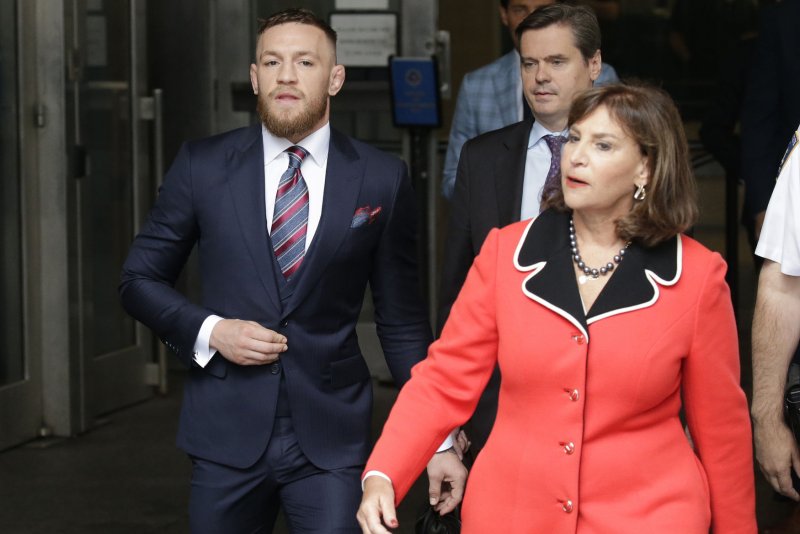 Conor McGregor (L) is facing a civil lawsuit after an incident with a fan that occurred Monday. File Photo by John Angelillo/UPI | License Photo

March 14 (UPI) -- UFC star Conor McGregor is facing a civil lawsuit after being charged with two felonies in South Florida on Monday.

Miami Beach police arrested McGregor, 30, Monday on charges of strong-armed robbery and criminal mischief. He was booked briefly into a Miami-Dade jail Monday night. He posted bond, and now awaits his trial April 10, according to the Miami Herald.

The lawsuit said McGregor was exiting the Fontainebleau Miami Beach hotel when Abdirzak recognized the fighter while the two were outside. Abdirzak pulled out his cellphone and attempted to take a picture of McGregor. The fighter walked up to him, reached out his left hand as if to give him a handshake and then "punched" the phone out of Abdirzak's hand, according to the lawsuit.

The phone fell to the ground and McGregor began to stomp on it. McGregor then picked up the phone and put it into his pocket before walking to a waiting vehicle. Abdirzak demanded his cellphone back, leading McGregor to laugh and yell "[expletive] you" while the car drove off, according to the suit.

MBPD has arrested and charged Conor McGregor, DOB: 7/14/88, with Strong Arm Robbery and Criminal Mischief, both felonies. Please see arrest report and booking photo below. No additional information will be provided. pic.twitter.com/9HdkRWPnd8

Abdirzak is a British citizen and father of one child who resides in London, according to the Miami Herald. He was on a 10-day vacation in Miami with friends.

Monday's altercation was the latest incident for McGregor. The MMA fighter attacked a bus that carried UFC lightweight champion Khabib Nurmagomedov and other fighters last April. He threw a dolly through a window of the bus, causing several injuries.

McGregor was arrested for the incident and initially charged with two felonies, but ended up pleading guilty to a single disorderly conduct charge last July. He finished a court-mandated five days of community service and three days of anger management courses to complete the terms of the plea deal.

McGregor last fought at UFC 229 on Oct. 6, 2018, against Nurmagomedov. The Irish fighter has been in South Florida on vacation while celebrating his mother's 60th birthday.

Sports News // 1 day ago
French Open: Gauff advances, Djokovic vs. Nadal looms
May 27 (UPI) -- Cori "Coco" Gauff became one of three American women to advance to the fourth round of the French Open on Friday in Paris. Rafael Nadal and Novak Djokovic also won and remain on track for a premier quarterfinal matchup.

Sports News // 1 day ago
French Open: Begu fined, not disqualified, for hitting boy with thrown racket
May 27 (UPI) -- Romanian Irina-Camelia Begu was fined $10,000, but not disqualified, for throwing her racket and hitting a boy in the stands during her second-round match at the 2022 French Open, tournament officials announced Friday.

MLB // 1 day ago
MLB reprimands teams for 'unacceptable' accommodations for women employees
MIAMI, May 27 (UPI) -- Several MLB teams "fall embarrassingly below" standards, create an "untenable working environment for women" and deprive women of "equal access to participate" in the game, MLB said in a memo obtained Friday by UPI.

NHL // 1 day ago
McDavid's OT winner guides Oilers by Flames for Stanley Cup semis spot
May 27 (UPI) -- Connor McDavid whipped a wrist shot by Jacob Markstrom 5:03 into overtime to lead the Edmonton Oilers past the Calgary Flames in Game 5 of their second-round playoff series and into the Western Conference finals.

MLB // 1 day ago
Yankees, Rays use social media to share U.S. gun violence stats during game
May 27 (UPI) -- The New York Yankees and the Tampa Bay Rays collaborated during their game Thursday night to use their social media accounts to raise awareness about gun violence in the United States.