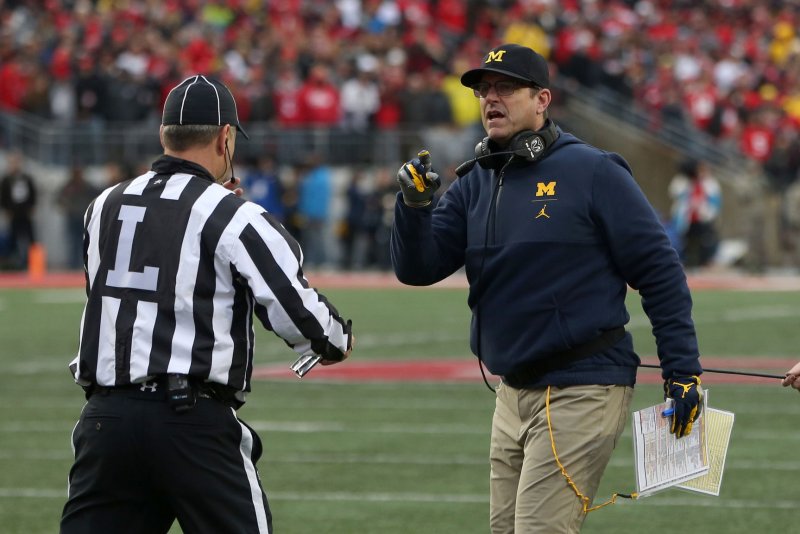 For two teams that play in different conferences, Michigan and Florida have become awfully familiar with each other in recent years.

Three years ago in Michigan, head coach Jim Harbaugh's first year on the job, the Wolverines routed Florida in the Citrus Bowl, 41-7.

Last season, the teams opened the season against each other in Arlington, Texas, with Michigan once again controlling the Gators and earning a 33-17 win.

After both ended the regular season ranked in the top 10, No. 7 Michigan and No. 10 Florida once again will meet up, this time in the Chick-fil-A Peach Bowl at noon on Saturday.

The game will serve as a nice prelude to the college football playoff semifinal games that will take place on Saturday afternoon and evening.

The Wolverines spent a majority of the season fully expecting to be in one of those playoff games after a 10-game winning streak that followed a season-opening loss at Notre Dame, but those dreams were destroyed in a blowout loss to Ohio State on Nov. 24.

Not only did Michigan lose out on a playoff berth -- the Wolverines held the No. 4 spot in the playoff rankings before the game -- but the 62-39 loss to the Buckeyes prevented the Wolverines from even making it to the Big 10 championship game and relegated them to the Peach Bowl.

Despite the disappointment of not winning a conference title or making the playoff, Michigan still is taking solace in making a New Year's Six bowl for the second time in three years (Michigan lost to Florida State two years ago in the Orange Bowl) and is shooting to end the year with an 11th win.

"We're hungry for another win," Harbaugh said. "That's our mindset. We are thrilled as well."

Michigan won't be taking the same team to Atlanta that it did to Columbus, however.

Junior defensive end Rashan Gary and junior linebacker Devin Bush have both declared for the NFL Draft and won't participate in the bowl game in order to prepare for April's draft.

Senior running back Karan Higdon also said he won't be playing in the bowl game.

Not being at full strength won't help Michigan against a Florida team that went 9-3 during the regular season in Dan Mullen's first full year as head coach.

"They are really talented," Harbaugh said of Florida. "Uber talented. Twitched up. They can run and move."

After back-to-back lopsided losses to Georgia in Jacksonville and Missouri on its homecoming game, Florida rebounded by winning its final three games to earn its way into a New Year's Six bowl.

"We want to compete for championships," Mullen said. "When you get into a matchup in a bowl game with two top-10 teams, I don't know if it defines a lot about next season, but when you look at us as a program as a whole, we want to be a team that is continually in the top-10. Because if you are, you are in a position to compete for championships on a regular basis. I think certainly it will be a challenge and a test to see where we are at."

On paper, points look like they will be at a premium going into the game with how powerful each defense is.

"You look at what they do, they are physical on the offensive side of the ball," Mullen said. "They run the ball. Great ball control. They put a lot of pressure on you on the offensive side of the ball. And then they are extremely aggressive on defense. When you are playing ball control and physical on offense and you are controlling the tempo of the game, and then you can come back and put an aggressive, blitzing defense on the field, it puts a lot of pressure on the other team to execute at a high level."