5-time medalist Hedrick: 'Difficult' to see U.S. behind in medals 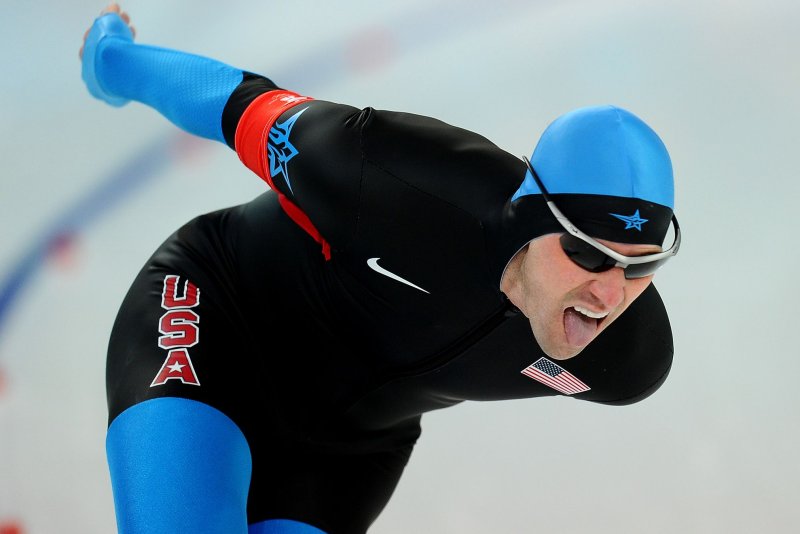 Feb. 21 (UPI) -- Five-time Olympic medalist Chad Hedrick finds it difficult to look up at the medal count and see Team USA distantly trailing the leaders at the 2018 Winter Games.

After all, he does have some experience in adding to that treasure tally. He owns a gold medal, two silver medals and two bronze medals. The speed skating icon won three of the them in 2006 in Turin, Italy. The other two came in 2010 at the Vancouver Winter Olympics.

"In the past, Team USA had pretty strong performances from speed skating in particular," Hedrick told UPI Tuesday. "I think maybe that is a little bit of a void here. I think the other sports are doing OK, maybe not as good as they have in the past."

"But for me to look up there...It's difficult to look and see us so far behind. It's like a guy who went to Alabama to play football and like eight years later he's part of the alumni. He's looking at the medal count like 'man, we aren't doing as good as we were when I was [winning] a national championship...so it's disappointing, but I'm sure everyone of them worked hard. Maybe they are having some bad luck and maybe there are just great athletes on the other side of the field."

Team USA trailed Norway, Germany, Canada, the Netherlands and France entering day 12 of the Winter Games in Pyeongchang, South Korea. Norway had 29 medals after 11 days of competition, while Team USA had 12. Just one of the dozen claimed by Americans came from speed skating. John-Henry Krueger won silver in a men's short-track event.

Hedrick now works in real estate in the Houston-area. He lives in The Woodlands with his three children and wife Lynsey, but was in Hersey, Pa. on Tuesday, meeting with fans at Team USA WinterFest presented by Hershey's. The candy company is also giving out free Hershey's Gold candy bars throughout the Games for every time Team USA wins a gold medal.

Some Games gurus have mentioned the ideal conditions for foreign lands outside of the United States, claiming a possible advantage during outdoor events for other countries. But Hedrick says it's all "perception."

"I know that the U.S. national team has every resource they need, thanks to sponsors like Hershey. We have the best coaches, the best facilities. We have all of those things that give us the opportunity to put on the stars and stripes and display our skills there on that day. I think ice conditions and different teams having this or that is a moot point.

"I know that I was blessed to have everything that I needed to do my best. And when you get to the line, it's all on you man. This is your window of opportunity to go and chase gold. And if you got it, you got it. If you don't, you know you need to make a decision whether you are going to battle another four years or not." 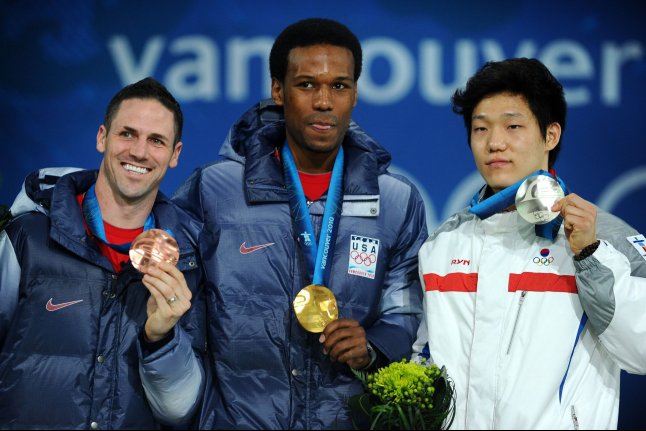 Korea's Tae-Bum Mo (silver), Shani Davis of the United States (gold) and teammate Chad Hedrick (bronze) celebrate their medals during a Medal Ceremony at the 2010 Winter Olympics at BC Place in Vancouver, Canada. File photo by Roger L. Wollenberg/UPI

He was able to mute the noise along the way, while pumping up his intensity for frozen floor focus.

"This isn't a world championship," Hedrick said. "This isn't a World Cup. It's now the Olympics. They put these five circles on the wall and you are skating between these walls with these five circles. It plays a lot of tricks on your head. It makes you feel like the next five or 10 minutes are going to define me as a person, whether I succeed or if the American public looks at me as a failure."

That type of pressure could be seen several times during these Winter Games. Millions of viewers absorbed anxiety through their flatscreens when Nathan Chen repeatedly fell to the ice during his figure skating short program or felt for young speed skater Maame Biney when she finished in last place in the 1,500-meter event and tears streamed down her face.

John-Henry Krueger of the USA takes a victory lap after winning the silver medal in the Men's 1000m Short Track Speed Skating finals on Saturday at the Pyeongchang 2018 Winter Olympics, at the Gangneung Ice Arena in Gangneung, South Korea. Photo by Richard Ellis/UPI

"I think there are a lot of things that people watching don't think about," Hedrick said. "It's the difference between somebody who is very good and somebody who is a champion. It's the one who can handle that pressure and come to the starting line ready to go and make it all happen."

There isn't a lesson in a textbook about what to do on that starting line. The secret to success on the grandest stage is a lot of training, according to Hedrick.

"It's called go there and be prepared because there is nothing better than knowing you put everything into it and nobody can prevent you from competing at your best," he said. "I remember before my 5k, when I won my gold medal in Torino. I remember the pressure that I felt. I remember having 35 people in the stands from Texas who came to support me. I remember feeling almost like a circus monkey, like I had to perform for them so they enjoyed this trip that they came on and spent thousands of dollars on. When, you know what, these people that are watching me, they are going to love me if I'm getting seventh place or if I win. It's a lot of added pressure you put on yourself. But you just have to go there, have fun and know that all the preparation you put into it was good enough."