Athletes from Switzerland walk into the stadium during the opening ceremony at the Pyeongchang 2018 Winter Olympics on February 9 at the Olympic Stadium in Daegwalnyeong, South Korea. Photo by Matt Healey/UPI | License Photo

The two unidentified athletes are the first Olympians to be infected by the virus, which is known to cause stomach pain and diarrhea. Hundreds of security officers and others working at the Olympics had previously been affected.

Team Swiss said the two athletes were taken to single rooms and treated by team doctors. They haven't been staying at the athletes' village, and PyeongChang's organizing committee confirmed that they have instead been staying at Phoenix Park, near the venue for snowboarding and freestyle skiing events.

Swiss officials also said the athletes no longer have symptoms of norovirus and should be able to compete in their events.

Earlier Friday, the International Olympic Committee's spokesman Mark Adams said, "We are aware of that [situation with the Swiss athletes] and have followed protocols." 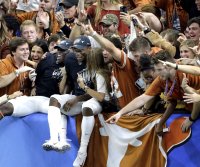