NFL Commissioner Roger Goodell walks onto the field before the NFL season opener between the Kansas City Chiefs and the New England Patriots at Gillette Stadium in Foxborough, Massachusetts on September 7, 2017. File photo by Matthew Healey/UPI | License Photo

President Donald Trump once again took on NFL commissioner Roger Goodell for how the league is handling the national anthem protests.

In a tweet early Wednesday morning, Trump blasted a plan, as reported by the Washington Post, that would keep NFL teams in the locker room next season during the playing of the "The Star-Spangled Banner."

"The NFL is now thinking about a new idea - keeping teams in the Locker Room during the National Anthem next season," Trump tweeted. "That's almost as bad as kneeling! When will the highly paid Commissioner finally get tough and smart? This issue is killing your league!"

Some NFL owners believe there is a strong possibility they will enact an offseason change to the league's national anthem policy if players' protests persist through the end of this season, reverting to a previous approach of keeping players in the locker room while the anthem is played, the Washington Post reported in a story Tuesday, citing sources familiar with the league's inner workings.

NFL players did not usually stand on the sideline for the national anthem until 2009 when the league changed its policy to bring the teams out.

Kaepernick filed a grievance under the collective bargaining agreement against the NFL last month, accusing all 32 owners of collusion against signing him to an NFL contract. Goodell has stated on multiple occasions this season that Kaepernick is not being blackballed.

NFL owners and executives have been scrambling this season to determine the best response to players kneeling during the anthem. Players who have demonstrated have said they are protesting racial inequality, but not the flag or the anthem itself.

Trump's position earlier this season unified more NFL players to protest before or during the anthem. He said during a political rally in Huntsville, Ala., on Sept. 22 that NFL owners should fire the players who knelt during the anthem.

"We're proud of our country. We respect our flag," Trump said to loud applause at the campaign event in Alabama. "Wouldn't you love to see one of these NFL owners, when somebody disrespects our flag, to say, 'Get that son of a bitch off the field right now. Out. He's fired! He's fired!'"

On Monday morning, Trump called on the NFL to suspend Oakland Raiders running back Marshawn Lynch for sitting during the anthem before Sunday's game in Mexico City but standing for the Mexican national anthem. Trump criticized Lynch for his protest before the game against the New England Patriots, who went on to win 33-8.

"Marshawn Lynch of the NFL's Oakland Raiders stands for the Mexican Anthem and sits down to boos for our National Anthem. Great disrespect! Next time NFL should suspend him for remainder of season. Attendance and ratings way down," Trump tweeted. 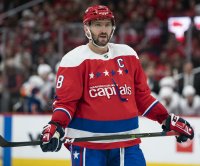