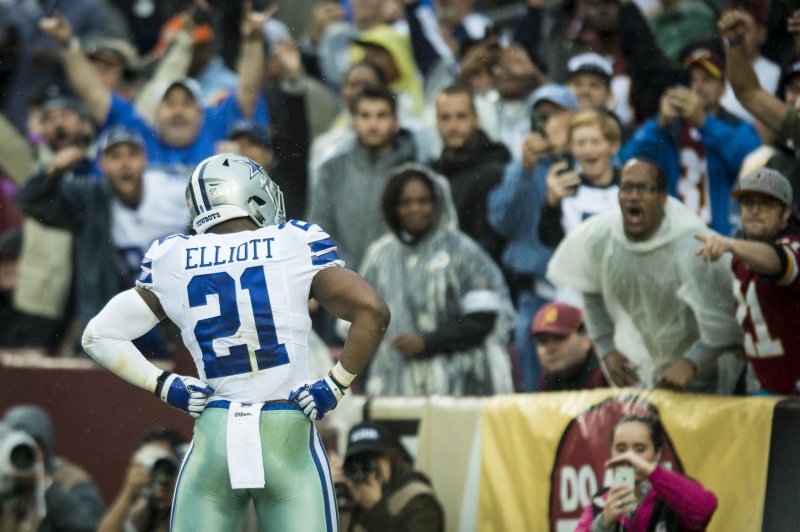 Dallas Cowboys running back Ezekiel Elliott celebrates a touchdown during the first quarter against the Washington Redskins on Sunday. Photo by Pete Marovich/UPI | License Photo

Dallas Cowboys owner and general manager Jerry Jones said running back Ezekiel Elliott is paying for the mistakes made by NFL commissioner Roger Goodell on the heels of Ray Rice's domestic violence situation in 2014.

"Zeke is a victim of an overcorrection," Jones said on 105.3 The Fan in Dallas.

Jones' comments come one day after Elliott lost his bid for a preliminary injunction that would have stayed the NFL's six-game suspension for violating the league's personal conduct policy. Elliott will not be on the field again until Dec. 17 against the Oakland Raiders, pending a potential appeal.

"(Goodell's) swing of judgment has been unbelievable from the Ray Rice thing (from) one or two games all the way up to a six-game suspension when you truly have got a debate," Jones said. "Even this judge said it shows that very reasonably people could possibly come down on both sides of this. Well, under our legal system it has to be stronger than that for someone to have done it. Now, we all know we were not there to see it, but I do have every point of contention on both sides and in our system in this country, Zeke would not have any issue here as to his work place.

"With the knowledge that I have, the circumstances aren't treating him fair. Two years ago this wouldn't be an issue, before Ray Rice."

Rice initially was banned two games but was later suspended indefinitely when a video of the incident emerged. Jones contends the league's change in stance when it came to Elliott was to appeal to the public.

"They swung from where this, two years ago by the same collective bargaining agreement, in my mind, (Elliott) would be playing," Jones said. "Now he goes to where he's got the extreme penalty of six. Now there's a bigger penalty. You can be suspended. But still this is the max ... Anybody that has really looked at the facts of the case, has really looked at it, knows there was divisive and difference of opinion within the league itself."

Judge Katherine Failla of the Southern District of New York said Elliott and his NFL Players Association legal team failed to demonstrate a substantial question warranting the extraordinary remedy of injunctive relief, forcing him to begin his six-game suspension immediately.

Moreover, the court ruled that the NFL was fair in its investigation and arbitration process per the terms of the collective bargaining agreement and the league's personal conduct policy.

Elliott, who currently ranks third in the league in rushing with 690 yards, had a career-high 33 carries for 150 yards in Sunday's 33-19 victory against the Washington Redskins. It was his third straight 100-yard game and third career game over 150 yards dating back to last season.

The Cowboys (4-3) will go with Alfred Morris, Rod Smith and Darren McFadden in place of the suspended Elliott.