ST. LOUIS -- Carlos Asuaje's RBI single snapped a tie in the top of the ninth inning Thursday night as the San Diego Padres dumped the St. Louis Cardinals 4-3 for their first series win at Busch Stadium since April 2011.

Jose Pirela added a sacrifice fly that scored Margot on a close play to tack on insurance for San Diego (57-70), which prior to this series had lost 14 of its past 18 games in St. Louis.

Padres reliever Kirby Yates (3-4) escaped a two-on, no-out jam not of his doing in the eighth. Closer Brad Hand worked the bottom of the ninth to garner his 12th save despite allowing a leadoff homer to Randal Grichuk, the right fielder's 16th of the year.

The Cardinals (64-63) remain 4 1/2 games behind the first-place Chicago Cubs in the National League Central. St. Louis, whose bullpen gave up 12 runs in seven innings during the series, is five games behind the Colorado Rockies in the race for the second NL wild card.

Martinez hurt his cause in the sixth, giving the Padres their first run when he overthrew catcher Yadier Molina on a potential 1-2-3 double-play ball off Cory Spangenberg's bat. Matt Szczur made it 2-1 San Diego with an RBI infield hit later in the inning.

Molina stroked a two-out RBI single in the Cardinals' half of the sixth to tie the game at 2.

The game was controlled by pitching during the first five innings. Both Perdomo and Martinez worked quickly and used double-play balls to quell threats.

The Cardinals finally broke through in the bottom of the fourth. A one-out double by Dexter Fowler off the right-center-field wall was followed by a two-out double down the left field line by Gyorko for a 1-0 lead.

NOTES: St. Louis 1B Matt Carpenter (virus) didn't start for the second straight game but was available for pinch-hitting duty if needed. Carpenter, the team's usual leadoff hitter, wasn't at the ballpark for the Wednesday night game. ... San Diego RHP Jhoulys Chacin (hand) is considered day-to-day after being injured while fouling a pitch off Wednesday night. Chacin became the first player in major league history to hit four batters and collect two hits in the same game during his 6-2 loss. ... Cardinals INF Jedd Gyorko had homered in six consecutive games against the Padres before failing to hit one Wednesday night.

Soccer // 5 hours ago
Canada shocks U.S. women's soccer team to advance to Olympic final
Aug. 2 (UPI) -- Jessie Fleming netted a 75th-minute penalty kick Monday to lift Canada to a 1-0 upset of the U.S. Women's National Team in the soccer semifinals of the 2020 Summer Olympics in Tokyo. 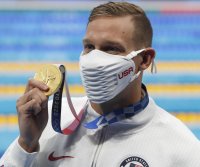 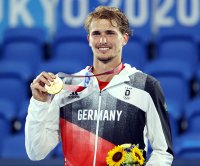