Perhaps we should be referring to William Byron as the fourth. At the age of 19, the North Carolinian has been announced by team owner Rick Hendrick as one of his drivers next year in the Monster Energy NASCAR Cup Series.

Byron becomes the fourth young driver to join one of the major teams for next season, hence William the Fourth.

It may seem as though Byron is being coronated before ever stepping into a Cup car after winning seven races in the Camping World Truck Series in his first season and three during his current rookie year in the Xfinity Series. Those are impressive stats and unprecedented, so he deserves his opportunity to move to the big leagues. (Joey Logano's stumble when he arrived at age 18 is still a fresh memory, but Byron will be 20 by the end of this season.)

For all his talent, Byron is part of the broader movement toward younger drivers by the front-line teams. Hendrick previously signed 24-year-old Alex Bowman to replace Dale Earnhardt, Jr.; Team Penske has called in its option on the services of 23-year-old Ryan Blaney; and Joe Gibbs Racing has done likewise with Erik Jones, who is 21.

Byron presents himself as confident, but not cocky. Don't expect motor racing's version of Bryce Harper.

"It's definitely surprising," Byron said of his rapid success. "I didn't expect it out of myself. I feel like I've put the work into it and I'm learning on the job. That's been the biggest thing for me, to learn from the best people I can have around me."

The switch to younger drivers is inevitable, but particularly timely when it comes to the current sponsorship landscape. Teams are receiving less money from sponsors as a result of external and internal influences. In the current market, sponsors have a multitude of choices in various racing venues and other sports. And, when they look at NASCAR, they see a series where TV ratings and attendance have declined.

For team owners, the sponsor numbers, when it comes to how many millions are paid, look better with a younger driver in the seat. The younger drivers are inclined to accept more old-fashioned deals, like a percentage of the purse, and forgo the recent trend of retainers priced well into seven figures.

There are no specific figures available from the contract of Byron. But his team owner in the Xfinity Series, Earnhardt Jr., has confirmed the retainers are not what they used to be. As NASCAR's Most Popular Driver, who has enjoyed taking home a retainer for much of his career, Earnhardt Jr. should know. (It's all relative. It was Hendrick who started the trend when he signed Jeff Gordon and lured him away from Ford with a $750,000 offer in 1992. Byron has probably received a retainer better than that, but not anywhere close to what a driver in a similar circumstance might have been offered five years ago.)

The NASCAR TV numbers are still strong -- an average viewership in the millions and nearly half the events on the schedule have decent attendance figures. But perception about future returns is everything in business, so sponsorships are being pegged to current numbers and likely with various options for the future. Future success, meanwhile, now depends more than ever on the fresh, young faces in NASCAR.

The sponsorship problems explain why a high-paid former champion, Matt Kenseth, is on the market after being replaced by Jones. There was a time when champion status was golden, a circumstance that describes the career of Kurt Busch. A lot of pundits thought Roger Penske was making a mistake when he signed former champion Busch to succeed Rusty Wallace, himself a champion. Sponsor Miller Lite wanted a champion and Penske wanted Kenseth, who elected not to leave the team of Jack Roush. So, Penske hired Busch instead.

The hot ticket currently is accomplished youth. It helps that 25-year-old Kyle Larson has hit his stride and Logano finally came into his own in his mid-20s. Along with Blaney, who scored his maiden victory this year, they prove the young drivers can not only win races, they can become dominant players and championship contenders, which is a sponsor's dream.

The young drivers obviously offer an opportunity for sponsors to engage a younger fan base, which is money in the bank for marketing programs. But the youngsters are also cost-effective for team owners now living in the charter system. Hendrick looks to be balkanizing his current sponsorship by splitting Axalta between the No. 88 of Bowman and the No. 5 car to be driven by Byron, who will also have backing from Liberty University. It gives the appearance of a smaller budget than this year behind the departing Kasey Kahne, whose sponsors are also leaving.

Hendrick will also continue to pay Kahne's retainer in 2018 during the final year of his contract and looks to be forming an alliance with a team where Kahne will drive and earn his purse percentage.

The owner of Hendrick Automotive Group, Hendrick has on occasion likened his racing team to the car business. "I know the bad times are coming sooner or later," he once said, "and I want to be ready for them." Well, the bad times have arrived in terms of sponsorship.

It's also a problem vexing others, such as Stewart-Haas Racing, Richard Childress Racing and Richard Petty Motosports. They are all holding out hope that come this fall they'll be able to announce new sponsors and a full slate of entries. Meanwhile, the careers of veterans Kenseth, Busch and Danica Patrick, plus new arrivals Ty Dillon and Darrell "Bubba" Wallace hang in the balance until the sponsorship picture comes into focus for these teams.

After Byron won the Xfinity race at the Indianapolis Motor Speedway in July, Hendrick was asked about the teenager's future in the Cup.

"We're not ready to cross that bridge yet," he replied. But after Kahne won the Brickyard 400 the following day, qualifying him for the playoffs, and Bowman was signed up to represent Nationwide Insurance in the No. 88 Chevy, the timing was right to announce the arrival of Byron.

The driver, who started competing in the online iRacing series before he was old enough for a driver's license, gives every appearance of living up to the opportunity presented by Hendrick Motorsports, where he will join a relatively young lineup that includes Chase Elliott and seven-time champion Jimmie Johnson.

"His character is unbelievable," said Hendrick "Very, very bright. He spends all his time either studying, or iRacing, in a simulator or in a racecar. His rapid rate of success has just blown us all away." 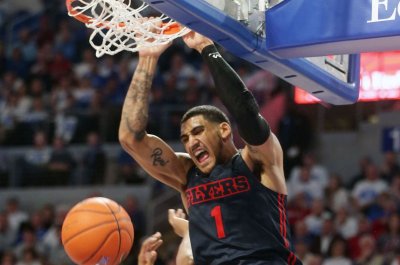