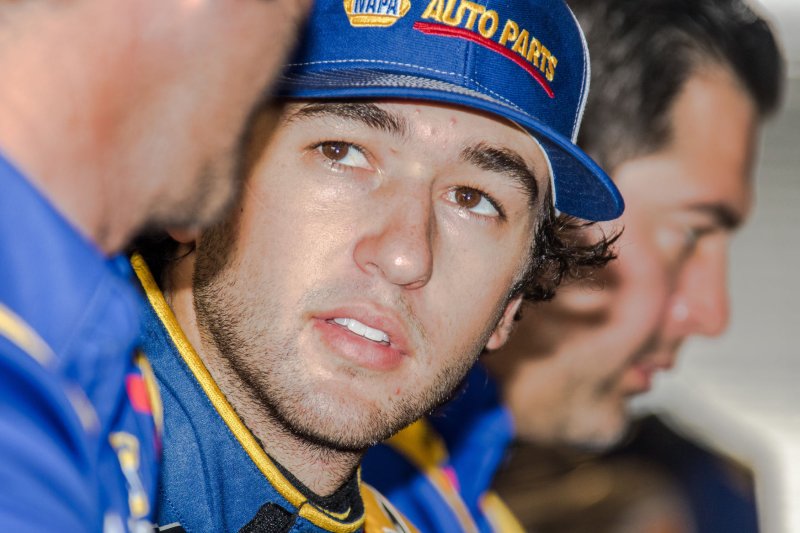 Chase Elliott confers with his crew while preparing for practice for the 2017 Brickyard 400 in Indianapolis last month. Photo by Edwin Locke/UPI | License Photo

When Chase Elliott travels to Michigan International Speedway, he must feel like Sisyphus -- the king in Greek mythology forced to roll a boulder up a hill, and when he reaches the pinnacle, the boulder rolls off, forcing him to repeat the process for all of eternity.

The No. 24 Hendrick Motorsports driver has made three Monster Energy NASCAR Cup Series starts in the Wolverine State and has finished second all three times.

Elliott enters Sunday's contest coming off a series of solid, yet unspectacular performances. He placed 13th last week at Watkins Glen, 10th at Pocono, 39th at Indianapolis due to engine trouble and 11th at New Hampshire. Still he ranks 14th on the playoff grid, 39 points ahead of Clint Bowyer on the cutoff line. Elliott has little margin of error when it comes to making the postseason, but can guarantee himself a playoff berth by grabbing a win at Michigan.

"I like Michigan, I've always liked going up there," Elliott said. "I really love that area. It's just a cool part of the United States to go to. I like it up there -- it's a nice area and that is kind of why I like going."

Elliott Sadler is sitting high and mighty atop the NASCAR Xfinity Series standings right now -- 52 points ahead of William Byron.

He leads the circuit with five stage wins, but hasn't visited Victory Lane at the end of a race this season. As a result, he trails the three-race, two-stage winner Byron by 12 playoff points.

A win in Saturday's Mid-Ohio Challenge at Mid-Ohio Sports Car Course (3:30 p.m. ET on NBCSN) would help Sadler close the gap and increase his odds of capturing his first NASCAR Xfinity Series championship.

Sadler has finished in the top 10 in all four of his career starts at Mid-Ohio. He has a high finish of sixth at the 13-turn road course (2013, 2015) -- the second of three road course races on the Xfinity schedule. The No. 1 Chevrolet driver placed 18th in the first road-course race at Watkins Glen last Saturday.

"Last weekend, we got a good look at what our road course program will be like for these next couple of races," Sadler said. "With the first road race under our belt, we now know what we can expect. We can really dial in on the handling of our Chevrolet and our strategy. We had a fast car last weekend, just had a little bit of bad luck. I like Mid-Ohio -- this weekend should be fun."

The Oklahoman has won three of the last six races, including two of the last three. In 12 starts this season, Bell boasts four wins, eight top-5s, 11 top 10s and a 5.6 average finish. He ranks first in the Camping World Truck Series standings -- 18 points ahead of second-place Johnny Sauter.

Bell will go for a fifth victory in Saturday's LTI Printing 200 at Michigan International Speedway (1 p.m. ET on FS1). He finished 24th in his lone start at the two-mile track last year after an incident on Lap 75.

"I ran really well at Michigan last year until I crashed going for the lead late in the race, so I'm looking forward to going back there this year and trying to redeem myself," Bell said. "Rudy (Fugle, crew chief) had a really fast Tundra there last year with William (Byron) -- he and I worked really well together and were able to stay up front most of the race. Michigan is a place that you can't really drive away from people, so you have to make sure that your truck handles well in the draft. Using all the aero techniques that you have in your arsenal is going to be the key to success this weekend."

What to Watch For: Kyle Larson goes for his third straight Michigan win. ... Martin Truex Jr. attempts to earn a second consecutive victory and add to his Monster Energy NASCAR Cup Series-high four wins. ... Dale Earnhardt Jr. needs a win to get into the playoffs and has triumphed twice at Michigan. ... Kurt Busch and Matt Kenseth lead active drivers with three Michigan victories. ... Brad Keselowski tries to get his first checkered at his home track. ... Daniel Suarez can build on his career-best third-place finish from last weekend at Watkins Glen.

What To Watch For: Mid-Ohio marks the second of three road course races for the NASCAR Xfinity Series this month. ... Four different drivers have won the four NASCAR Xfinity Series races held at Mid-Ohio. Former winners in Saturday's field include Regan Smith (2015) and defending victor Justin Marks. ... William Byron attempts to add to his series-leading 17 playoff points, and cap off a week that included his announced promotion to the Monster Energy NASCAR Cup Series in 2018 to driver the No. 5 Chevrolet for Hendrick Motorsports.

NBA // 13 hours ago
NBA Draft 2022: Banchero, top picks ready to make quick impact
June 24 (UPI) -- Former Duke forward Paolo Banchero, the No. 1 overall pick in the 2022 NBA Draft, and other top picks all said they are ready to make a rapid impact for their respective new teams after they were selected in Brooklyn.

Sports News // 13 hours ago
Ohio Derby, Irish Derby, Breeders' Cup qualifiers in 3 countries on weekend card
June 24 (UPI) -- Weekend horse racing has an international flavor with top races on three continents, but much of it points back to November's Breeders' Cup World Championships in the Kentucky Blue Grass.

NBA // 1 day ago
NBA Draft: Smith, Holmgren, Banchero expected to be first picks
June 23 (UPI) -- Auburn's Jabari Smith Jr., Gonzaga's Chet Holmgren and Duke's Paolo Banchero are expected to be the first three picks of the 2022 NBA Draft, which tips off at 7:30 p.m. EDT Thursday at Barclays Center in Brooklyn.