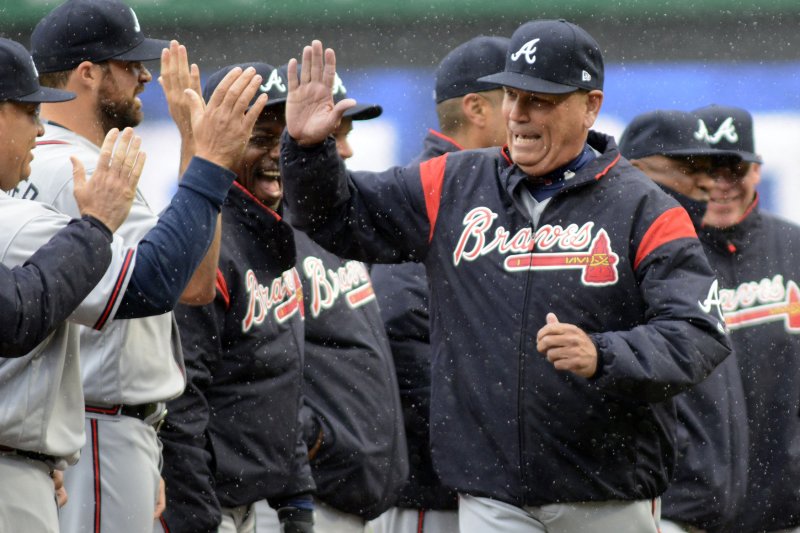 Atlanta Braves manager Brian Snitker greets his players before the start of a recent game. Snitker and the Braves topped the Washington Nations on Thursday. Photo by Archie Carpenter/UPI | License Photo

And the organization, aiming for its fourth division title since 2012, lost the public-relations battle that flooded the internet after the Nationals delayed the start of the game by 3 hours, 5 minutes for a downpour that never came.

In fact, it didn't rain at all for most of the delay.

Despite waiting nearly three hours to begin his warmups for a second time, right-handed starter Mike Foltynewicz picked up the victory, and Freddie Freeman collected his 1,000th career hit as the Atlanta Braves beat the Nationals 5-2.

"It was right up our alley; we are used to that," said Foltynewicz, noting the Braves have had several rain delays at home this year. "It is bad luck with the weather. Thankfully we got the game in. We will go from there."

Atlanta manager Brian Snitker wasn't quite as enamored with the delay, noting he heard very little from the Nationals during that time.

To make matters worse for the Nationals, center fielder Michael A. Taylor left the game in the fourth inning with a mild oblique strain and is expected to go on the 10-day disabled list. The Nationals will bring back Chris Heisey from the DL, according to manager Dusty Baker.

"It felt like a sharp pain in my side," Taylor said. "I've kind of been dealing with it for a couple weeks now. I'm just trying to manage it. And then on that swing, that made it even worse."

Some speculated that with a weak bullpen, the Nationals didn't want to risk starter Gio Gonzalez getting pulled after a rain delay and then having to use relievers. As it was, the game was not halted once it began at 10:10 p.m.

Atlanta's Ender Inciarte, who ended up with two hits, tweeted during the delay: "This No-Rain delay is something i've never seen before!!"

The Nationals were taken to task on twitter, including by Braves broadcaster Chip Caray. There were a few hundred fans in the stands when the game ended.

The Columbus Clippers, a Triple-A team in the International League, tweeted out a photo that read: "This is what a rain delay looks like" with the tarp covering a very wet field.

Back in the majors, Freeman went 2-for-5 and drove in two runs, and Kurt Suzuki added two hits, including a home run, and scored twice for Atlanta.

Suzuki hit a solo homer in the sixth to give the Braves a 3-2 edge off Gonzalez (7-4), who gave up three runs on seven hits in six innings.

Freeman had an RBI double off reliever Sammy Solis to make it 4-2 in the seventh. It was the milestone hit for Freeman, who is batting .345 this season, though he missed seven weeks due to a broken left wrist. Nick Markakis hit another RBI double off Solis later in the inning for a 5-2 bulge.

Relievers Sam Freeman, Jose Ramirez and Jim Johnson each pitched a scoreless inning for Atlanta. Johnson earned his 19th save, getting the last out with a runner on base and Bryce Harper on deck.

Johan Camargo also had two hits for the Braves.

The Nationals took a 1-0 lead in the second as Rendon led off with a double and eventually scored on a sacrifice fly by Difo.

Freeman had an RBI single to tie the game at 1 in the third. Atlanta took its first lead at 2-1 in the fourth as Suzuki had a leadoff double and scored on a single by Camargo.

Goodwin homered on an 0-2 pitch to tie the game at 2 in the fifth.

"That was a new one for me," Goodwin said of the delay without rain. "Just do everything you can to stay prepared. They tell you you've got a chance to play, so you keep that in the back of your head and just run with it. It's not easy. You kind of have to prepare before you even hit the field, think about it in here. As long as you can keep it locked in here, then it's not so bad once you get out on the field."