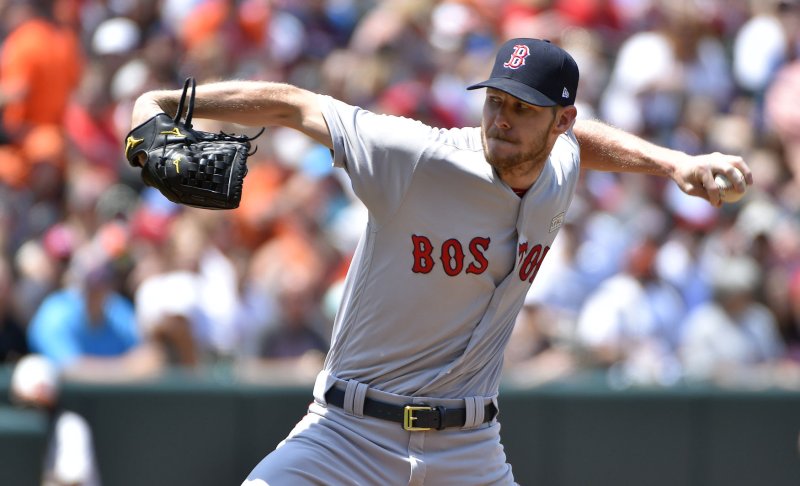 Chris Sale and the Boston Red Sox dropped a 4-1 decision to the Tampa Bay Rays on Thursday. Photo by David Tulis/UPI | License Photo

Ramos, whose RBI double tied the game in the fourth, gave the Rays some separation in the sixth. Faria (4-0) made his sixth consecutive quality start to begin his major league career, holding the Red Sox to one run on four hits in six innings.

Brad Boxberger pitched a 1-2-3 seventh, Tommy Hunter a scoreless eighth and closer Alex Colome the ninth for his 23rd save. Sale (11-4) lost for only the second time in his past nine starts. He yielded four runs on seven hits and no walks, and struck out 12 to extend his major-league-leading total to 178. Sale had limited opponents to three runs or fewer in each of his previous six outings.

The Brewers opened a 4 1/2-game lead over the Cubs in the National League Central. Zach Davies (10-4) worked six innings to win his third straight game and fifth in his last seven starts.

Jesus Aguilar was 3-for-5 and Hernan Perez added two hits to lead a 13-hit Milwaukee attack. Chicago's Mike Montgomery (1-6) suffered the loss in a 2 1/3-inning start, his shortest of the season.

RELATED Chicago Cubs calling Kyle Schwarber back up to bigs

TORONTO -- Russell Martin had three hits, including a home run and Francisco Liriano pitched into the seventh inning as Toronto won its third straight.

Liriano (5-4) allowed nine hits, one walk and three runs in six-plus innings while striking out four. Roberto Osuna pitched a perfect ninth to earn his 22nd save of the season and the 21st in a row.

Marwin Gonzalez homered in the second inning and was ejected in the sixth inning after striking out for arguing balls and strikes for Houston. The Astros' Lance McCullers Jr. (7-2) allowed six runs (five earned) and nine hits in 4 1/3 innings.

San Diego's Dinelson Lamet (3-3) allowed six runs (five earned) on six hits and four walks in four-plus innings. It was an ugly game for the Padres, who were held to five hits and committed three errors.

Colorado's Tyler Chatwood (6-10) allowed a season high-tying eight hits and three runs in six innings with four walks and four strikeouts. The Rockies have lost 12 of their past 15 games.

Marcell Ozuna drove in all three runs for the Marlins, and Ichiro Suzuki collected a pair of hits, giving him 3,054 in his major league career and allowing him to pass Rod Carew for the most hits by a foreign-born player.

Bell's one-double in the eighth inning made it 4-3. Polanco, who hit a solo home run in the fourth, and Elias Diaz followed later in the eighth with RBI doubles to chase Joaquin Benoit (1-3).

Machado's two-run homer off San Francisco emergency starter Chris Stratton highlighted a three-run second inning for the Tigers, who finished off a 5-4 homestand. Sanchez (1-0), who was making his 15th appearance this season, recorded his first victory since Aug. 23.

Stratton (0-2) made his first major league start and lasted 6 2/3 innings, allowing five runs on six hits while walking five. Johnny Cueto was a late scratch because of an inner ear infection.