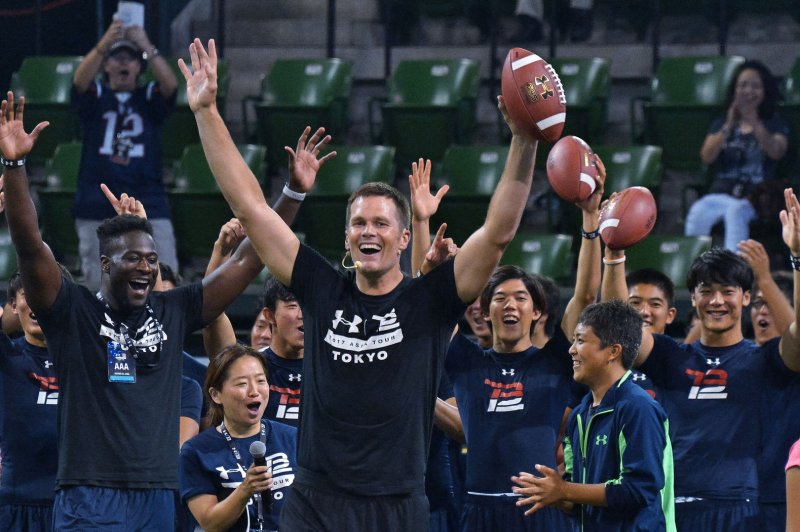 Baltimore Ravens quarterback Joe Flacco (5) throws downfield against the Philadelphia Eagles during the first half of their NFL game on December 18 at M&T Bank Stadium in Baltimore, Md. File photo by David Tulis/UPI | License Photo

St. Louis Blues goaltender Jake Allen makes a pad save on a shot by Chicago Blackhawks winger Patrick Kane in the third period on December 17 at the Scottrade Center in St. Louis, Mo. File photo by Bill Greenblatt/UPI | License Photo

The team at Fanatics recently conducted a study, compiling average statistics for athletes by their first names. Fanatics also created an interactive tool so users can see how they stack up against the athletic history of their namesake.

To put things in perspective, Brady averages 11 more touchdown throws per season than the average NFL Tom. Joes are also quite the quarterback. NFL players with that name average 20 passing touchdowns per season and complete 61 percent of their passes.

There are 54 active Chris or Christians in the NFL and 58 in Major League Baseball.

Fanatics compared names across MLB, NFL, NBA and NHL to compile the stats.

For baseball stats, Fanatics included only players with 100 innings pitched or more. Only batters with at least 100 at-bats were included in the study. Athletes in other sports had to have at least 10 games played.

On the NBA front, it's no surprise that Houston Rockets superstar James Harden paced the James name. He bucketed nearly 600 more points per season than the average James. He also has 189.4 more assists than other James-named players. Harden does slack in the rebound category against his namesake, averaging 35 fewer rebounds per season against other James-named ballers.

Patrick Kane is arguably the best Patrick ever when it comes to hockey. The Chicago Blackhawks winger averaged 16.53 more goals, 30.01 more assists, and 46.54 more points in a season than the average Patrick. He also sits in the penalty box for nearly seven fewer minutes than other Patricks. San Jose Sharks center Joe Thornton isn't quite as lucky when it comes to punching the clock in the penalty box. Thornton spends an average of 50.2 more minutes in the 'sin bin' than the average Joe.

If it wasn't already clear that Tom Brady's five Super Bowls made him better than the average Tom, his other stats make the case as well. He also averages nearly 1,500 passing yards more than other Toms and has a completion percentage 8.6 points higher than other Toms. Baltimore Ravens quarterback Joe Flacco throws 3.7 more touchdowns per season than the average Joe while retired gunslinger Tony Romo threw for 10.9 more passing scores than the average Tony during his career.

Tampa Bay Buccaneers wide receiver Mike Evans paces other NFL Mikes by scoring an average of 3.7 more touchdowns per season than his brethren.

On the defensive side, Seattle Seahawks star Michael Bennett needs to pick it up when it comes to combined tackles and interceptions. He averages nearly 20 fewer combined takedowns than other Michaels and 1.23 fewer pick-offs than his namesake. Kansas City Chiefs star Derrick Johnson picked up an average of 33.1 more combined takedowns than other Derricks while former All-Pro Charles Woodson averaged 1.86 more interceptions than average Charles' during his decorated career.