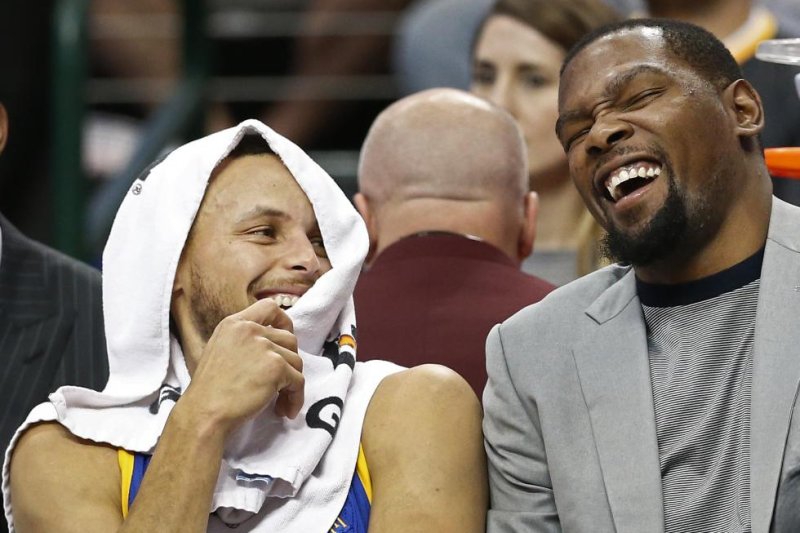 Golden State Warriors teammates Stephen Curry and Kevin Durant each cracked the top-25 on Forbes' list of the highest-earning athletes of 2017. Photo by Larry W. Smith/UPI

Indianapolis Colts quarterback Andrew Luck (12) is one of the highest-paid players in the NFL. He ranked No. 6 on Forbes' list of the highest-earning athletes of 2017. File photo by John Sommers II/UPI | License Photo

Rory McIlroy of Northern Ireland walks off of the 18th green in the final round of the 2017 Masters Tournament at Augusta National Golf Club in Augusta, Ga. File photo by John Angelillo/UPI | License Photo

James Harden of the Houston Rockets is interviewed by journalists during a 2016 season team practice at the LeSports Center in Beijing, China. Photo by Rolex Dela Pena/EPA

June 9 (UPI) -- Cleveland Cavaliers superstar LeBron James only made $86.2 million in 2017, not enough to be the highest-paid athlete in the world.

That honor went to Real Madrid star Cristiano Ronaldo, according to Forbes.

Forbes released its annual list on Wednesday. According to the American business magazine, Ronaldo cashed in for $93 million in 2017. He has $58 million in salary and bonuses and $35 million in endorsements.

Ronaldo, 32, is a four-time Ballon d'Or winner. He is also a social media genius. In May he set a record as the first man to reach 100 million Instagram followers. He uses the platform to showoff his posh lifestyle, while advertising for various companies. His most-liked photo has nearly four million likes.

The Portuguese soccer star has a $1 billion contract with Nike, according to reports. He makes an estimated $50 million annually in his deal with Real Madrid.

James might be hurting to get a win in the NBA Finals against the Golden State Warriors, but he isn't missing chances to rake in revenue on and off of the basketball court. The four-time NBA MVP also has a behemoth of a deal with Nike. He signed the lifetime contract with the sports apparel brand in 2015.

This shoe isn’t about me. It’s about the people that inspire me. Call out your heroes w/ #iDYOURHERO #IPROMISE https://t.co/DuE4BDKYyO

He made $31.2 million in salary and bonuses from the Cavaliers, while pulling in $55 million in endorsements, according to Forbes.

In a 2016 interview with GQ, James' friend and business partner Maverick Carter indicated that his deal with Nike is worth more than $1 billion.

Ronaldo rival and F.C. Barcelona superstar Lionel Messi ranks No. 3 on Forbes' 2017 list. Messi totaled $80 million this year, with $53 million in salary and bonuses and $27 million in endorsements.

Messi has five Ballon d'Or victories. The Argentinian is also getting his own theme park in China, set to open in 2019.

Tiger Woods, who is scheduled for a DUI charge arraignment hearing on July 5 following his Memorial Day arrest, ranked No. 17 on the list by pulling in $37.1 million. Woods hasn't won a major golf tournament since 2008.

Connor McGregor became the first UFC star to crack the top-25 on Forbes' list. He made $34 million in 2017, but his biggest payday is expected to come from his rumored bout against boxer Floyd Mayweather Jr.

Fighting is easy to me because I dedicate every single second of my thinking brain to it. pic.twitter.com/vWrioHvFX1

Expecting mother Serena Williams was the highest-ranked woman on the list. The all-time great tennis player ranked No. 51 on the list by pulling in $27 million.

Williams has a net worth of $150 million.

Los Angeles Dodgers ace Clayton Kershaw was the highest-earning baseball player on the list. Kershaw came in at No. 28 with $33.3 million in 2017.

Phil Mickelson was the oldest person to make the list. The 46-year-old golfer made $43.5 million this year and ranked No. 12. Retiring NASCAR driver Dale Earnhardt Jr. rounded out the list. His $21.4 million in 2017 ranked No. 100 out of the top-earning athletes of 2017.