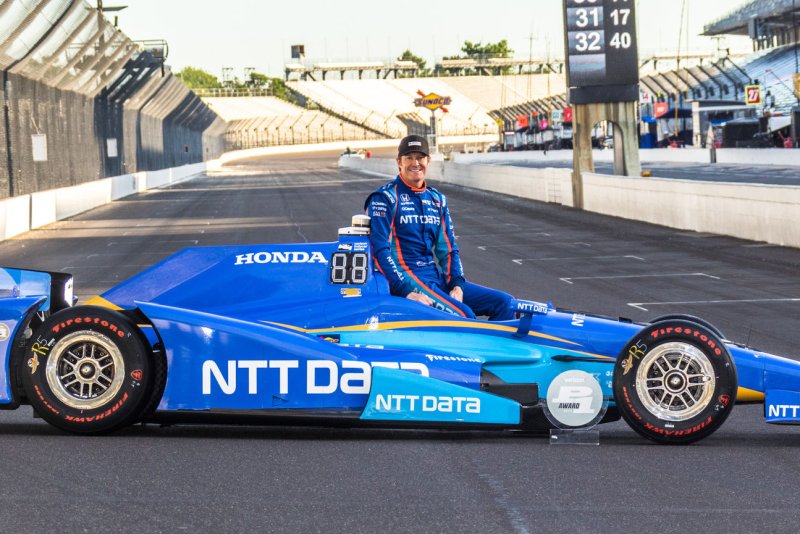 Pole Sitter Scott Dixon will lead the field to the start of the 2017 Indianapolis 500, at the Indianapolis Motor Speedway on May 22, 2017 in Indianapolis, Indiana.Dixon and former driver Dario Franchitti were robbed at gunpoint while making a late-night Taco Bell food run. Photo by Edwin Locke/UPI | License Photo

According to an Indianapolis Metropolitan Police report, Dixon, his wife Emma Davies-Dixon and Franchitti were robbed around 10 p.m. ET at the restaurant, which is located less than a mile from Indianapolis Motor Speedway.

Just hours earlier, Dixon won the pole position for this Sunday's 101st running of the Indy 500.

Police said they arrested two teenagers, ages 14 and 15, in connection with the robbery of credit cards and other personal valuables. Both teens were charged with robbery, and the 15-year old also was charged with resisting law enforcement.

Dixon and Franchitti declined to comment to reporters Monday.

IndyCar driver Tony Kanaan said Dixon was making a food run for a number of drivers.

"While they were ordering with their windows down two guys approached at gun point, they held a gun at Dixon's head and asked him for his wallet and his phone," Kanaan told the Indianapolis Star. "You don't expect that to happen, especially here."

Dixon, a four-time series champion who won the Indy 500 in 2008, will start on the pole for the third time in Sunday's race. He turned four laps at an average speed of 232.164 mph during qualifying.

Franchitti is a four-time IndyCar Series champion and three-time Indianapolis 500 winner. He retired following a crash at the 2013 IndyCar race in Houston, suffering a broken back and right ankle and a concussion.

Team owner Chip Ganassi took a lighthearted approach to the incident on Twitter: "There goes that Taco Bell sponsorship we were working on I guess."