May 18 (UPI) -- Floyd 'Money' Mayweather is waiting to see the money for his potential fight against Conor McGregor. Dana White said McGregor has signed his deal for the bout.

The UFC commissioner appeared on the TNT postgame show after the Eastern Conference Finals where he was asked about the boxing mega-fight.

"The McGregor side is done," White told the TNT crew. "I'm starting to work on the Mayweather side now.

"I'm not saying the fight will happen, but I've got one side done. Now it's time to work on the other. If we can come to a deal with Haymon and Mayweather, the fight's gonna happen."

McGregor confirmed the deal in a statement to TheMacLife.com.

"It is an honor to sign this record breaking deal alongside my partners Zuffa LLC, The Ultimate Fighting Championship and Paradigm Sports Management," McGregor said in the statement.

"The first, and most important part of this historic contract has now officially been signed off on. Congratulations to all parties involved. We now await Al Haymon and his boxer's signature in the coming days."

The matchup between the retired Welterweight titleholder (49-0) and the UFC Lightweight champion (21-3) has been rumored for more than a year.

Mayweather, 40, weighs about 150 pounds. McGregor, 28, weighs 155 pounds. "The Notorious" ended his last MMA match in the second round on Nov. 12 against Eddie Alvarez at UFC 205. "Pretty Boy" or "Money" has won his last seven fights by unanimous or majority decision. His last knockout came against Victor Ortiz in 2011. Mayweather hasn't entered the ring to fight since his 2015 win against Andre Berto.

White said the actual fighting will not be UFC format but "straight up" boxing. The UFC boss had a Sunday deadline to sign McGregor.

"There's only one fight that makes business sense," Mayweather told ESPN Wednesday. "I came out of retirement because I'm a businessman and I want to give the world what they want to see.

"McGregor's a fighter. I'm a fighter. This is what the fight fans and MMA fans want to see."

McGregor is the only fighter in UFC history to hold more than one title simultaneously. Mayweather won a dozen world titles during his career across five weight classes.

White previously said that he thought the bout could hand Mayweather a $100 million profit and generate $75 million for McGregor.

"It depends on how much the fight sells," White said in April on The Herd with Colin Cowherd. "If the fight sells as well as I think it can, Floyd makes a little north of 100 and Conor makes 75."

Mayweather previously took a jab at McGregor's career earnings when asked about negotiations for the fight. He said he made an offer to McGregor, which White denied.

"We tried to make the Conor McGregor fight. They know what my number is," Mayweather told ESPN's First Take. "My number was a guaranteed $100 million, that was my number. We're the 'A' side, and I don't really know how much money Conor McGregor has made. I'm pretty sure he hasn't even made $10 million in a MMA bout."

.@FloydMayweather joined the show today and has an exciting update for fans about @TheNotoriousMMA. pic.twitter.com/9WoSefukzd

"But we are willing to give him $15 million, and then we can talk about splitting the percentage, the back end percentage on pay-per-view. But of course, we're the 'A' side. How can a guy talk about $20 or $30 million if he's never even made $8 or $9 million?"

McGregor earned a UFC record $3 million purse for UFC 202, but he told TMZ Sports in November that he wants a much larger payday to box.

In January, White offered McGregor and Mayweather $25 million apiece for the fight. But the UFC commissioner disagreed with the boxer saying he was the main draw for the bout.

"To say that Conor McGregor hasn't made $8 million or $10 million in a fight, wrong again. To think that you're the 'A' side — how are you the 'A' side?" White told Cowherd.

"The last fight, the last major fight you were in, you left such a bad taste in everybody's mouth that nobody wants to see you again. His last fight did 350,000 pay-per-view buys. Conor did 1.3 [million for UFC 205] and 1.5 [million for UFC 202] pay-per-view buys. So I don't understand how you think you're the 'A' side and there's a reason why you want this Conor McGregor fight so bad — because you know that's your money fight."

White told Cowherd that fans will "get their money's worth" because he plans to stack another title fight on the card for the bout.

NBA // 5 hours ago
NBA takes draft picks from Miami Heat, Chicago Bulls
Dec. 1 (UPI) -- The Miami Heat and Chicago Bulls each will forfeit their next available second-round picks in the NBA Draft because the violated league free agency rules, the NBA announced Wednesday. 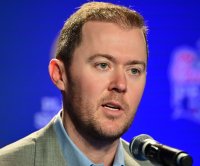 NBA // 12 hours ago
Deandre Ayton leads Suns over Warriors for 17th straight win
Dec. 1 (UPI) -- Deandre Ayton totaled a game-high 24 points and 11 rebounds to lead the Phoenix Suns to a win over the Golden State Warriors and extend the team's franchise-record win streak to 17 consecutive games.