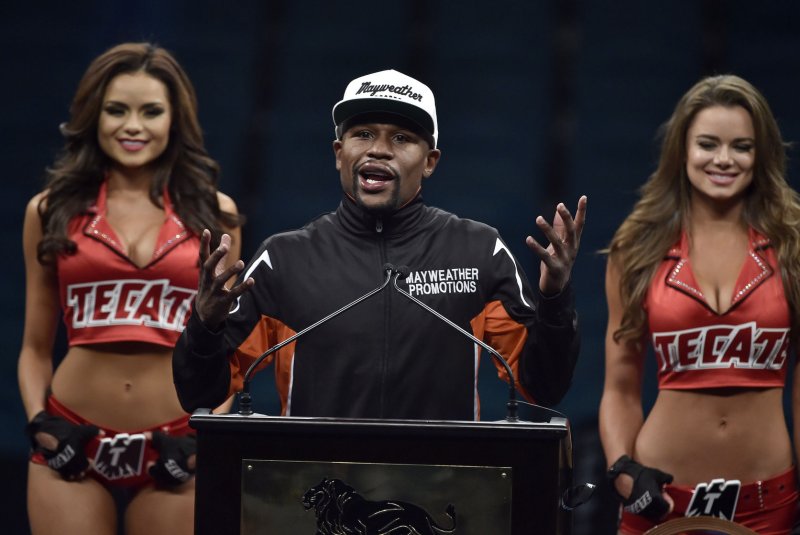 May 17 (UPI) -- He has many more luxury vehicles, but the small collection Floyd Mayweather showed off Wednesday is still worth much more than most people can afford.

The former professional boxer posted a video to social media displaying his array of Rolls-Royces. The six cars featured were: two Drop Heads, a Phantom limousine, a Phantom Limited Edition, an EWB Ghost and a Wraith.

Mayweather, 40, owns a career 49-0 record. He holds four title belts but hasn't boxed since beating Andre Berto in 2015 in Las Vegas. Mayweather has a net worth of about $400 million, according to Celebrity Net Worth. He said earlier this month that he is interested in buying an NBA franchise.

"Money" Mayweather is selling two of his Bugatti Veyron Grand Sports. The cars, worth $6.5 million combined, are available for purchase at the Luxury Auto Collection.

Mayweather recently opened a gentlemen's club in Las Vegas called Girl Collection. He posted a video on social media before the opening showing him with his crew, picking up piles of cash from the bank. Mayweather consistently posts photos on social media featuring wads of cash, exclusive vacation destinations and his posh lifestyle.

USA Today reported that Mayweahter has bought more than 100 cars from the same dealer.

NFL // 9 hours ago
Panthers coach Matt Rhule: RB Christian McCaffrey to miss 'a few weeks'
Sept. 24 (UPI) -- Carolina Panthers star running back Christian McCaffrey will miss at least a few weeks due to the hamstring injury he suffered during Thursday night's game against the Houston Texans.

Sports News // 10 hours ago
Ryder Cup: U.S. takes historic early lead over Europe after first day
Sept. 24 (UPI) -- The United States grabbed a 6-2 lead over Europe at the Ryder Cup on Friday for its largest opening-day advantage at the event since 1975.