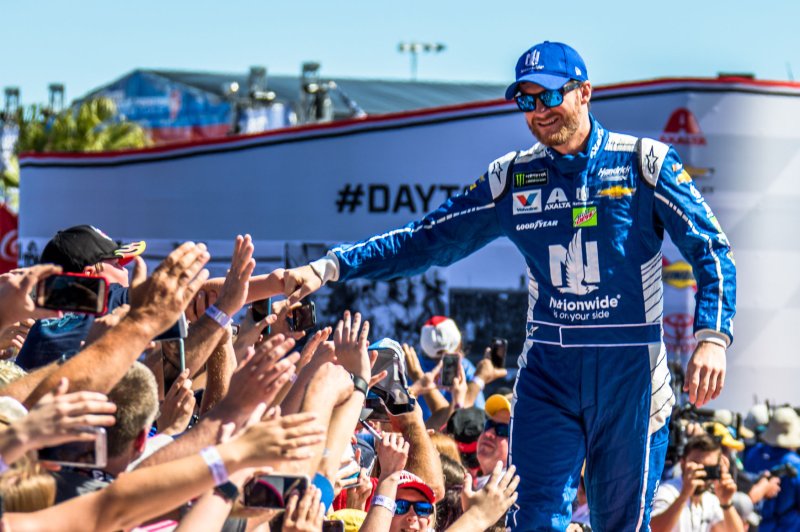 In fact, only one competitor claims more victories at the 2.66-mile behemoth overall -- his father, NASCAR Hall of Famer Dale Earnhardt, who amassed 10 victories there.

Earnhardt Jr. has struggled this season with only one top-10 showing in the first nine races, so Sunday's GEICO 500 at Talladega (2 p.m. ET at FOX) couldn't be coming at a better time.

"We haven't done anything to make our fans too happy here lately, so we'll try to change that at Talladega," Earnhardt said.

In addition to his six wins, the Hendrick Motorsports driver has 12 top fives, 16 top 10s and a 15.4 average finish at the Alabama track. Among active drivers, he claims the second-best driver rating (92.0) and third-best average running position (14.4).

Earnhardt, who has also won four times at Daytona International Speedway, is considered the top restrictor-plate racer on the planet. He ranks 24th in the series standings following his slow start -- 257 points behind leader Kyle Larson.

"(No. 88 team crew chief) Greg (Ives) told me last week that we aren't going to look at points anymore, we're just going to try to go win a race," Earnhardt said. "We had a great car in Daytona, just had some bad luck when we were leading, so we're looking forward to Talladega."

One, he's the No. 6 Ford driver. Two, he's finished sixth in six of his eight starts in the NASCAR Xfinity Series this season. Three, he's finished sixth in his last two races at Talladega Superspeedway -- the site of Saturday's Sparks Energy 300 (1 p.m. ET on FOX) -- where Wallace will attempt to post his first top-five result of the season.

In the first restrictor-plate race of the season at Daytona, Wallace placed 33rd following a crash on the 29th lap.

"I'm ready to hit the track this weekend in Talladega," Wallace said. "It's a place where anything can happen. We had a really fast car in February at Daytona and I know that Roush Fenway always brings a strong superspeedway car to the track."

What To Watch For: Dale Earnhardt Jr., who leads active drivers with six wins at Talladega, tries to visit victory lane at the Alabama track for the first time since spring of 2015. ... Team Penske drivers Joey Logano and Brad Keselowski will be favorites in Sunday's GEICO 500. They swept the Talladega races last year and have won four of the last five contests there. ... Austin Dillon looks poised for a strong finish after placing third and ninth in the two Talladega races last season. ... Last year's GEICO 500 featured 213 passes for the lead (not just counting lead changes at the Start/Finish line) throughout the contest -- tops among all 2016 races.

NFL // 6 hours ago
Browns' Baker Mayfield to miss TNF matchup vs. Broncos due to shoulder injury
Oct. 20 (UPI) -- Cleveland Browns star quarterback Baker Mayfield was ruled out of his team's "Thursday Night Football" matchup against the Denver Broncos because of a nagging shoulder injury.